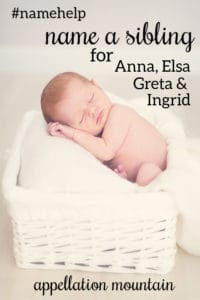 You all were so helpful when we were naming our twins, and now Ingrid and Greta are three and we are back for more help. This one is a singleton, but we are still not finding out boy or girl. Our older girls are Anna (stillborn, still counts), and Elsa. That was not on purpose, by the way, and shows that we should have asked for help then, too! Though Elsa loves her name.

We have long surnames for the middle and last, so we like to keep the first fairly short. We like a German/Scandinavian feel while still being very recognizable but relatively uncommon in English. I am a little reluctant to have another girl name that ends in ‘a’ as I don’t want to leave Ingrid out, but that might be silly. I also want a name that is straightforward to pronounce.

So the sibset is: Anna, Elsa, Ingrid, Greta, and …

We’re looking for a name with German/Scandi roots, a straightforward pronunciation, and relatively uncommon in the US. I’d say that your older kids’ names nail that description perfectly.

But your current short lists? Maybe not quite as much.

For boys, I think they all basically work. But Caspar and Garrick seem like possible spelling headaches. I’m not sure if Walter feels especially German/Scandi. That leaves Conrad and Lars which seem like the best of the bunch. And I do mean best! I think Conrad would be great with your girls’ names, and I can imagine Lars working well, too.

Turning to the girls’ list, I’m not sure if Katrin, Sabine, Lotte, and Dagny cross culture with the ease of Elsa or Ingrid. Clara, of course, does … but has been a steady Top 100 choice. So maybe it goes too far in the other direction?

Let’s look at some fresh possibilities.

If Walter isn’t clearly Scandinavian or German enough, but Caspar might go too far the other way, what’s in the middle?

Axel – It’s a medieval Danish form of the Old Testament Absalom, and I love that a figure skating jump is named for Norway’s Axel Paulsen. Thanks to the sound, the singer Axl Rose, and associations with all things automotive, Axel has a little bit of an edge. But when heard with siblings Ingrid or Elsa? It’s instantly a Scandinavian favorite.

Carsten – Carsten comes from Christian; it’s a form of the name used in some parts of Germany. I can’t decide if it’s more complicated than Casper/Kaspar/Caspar.

Jonas – One hitch: I’m not clear if Jonas sounds similar in English and Swedish/Norwegian/Danish, etc. I assume it takes a Y sound, right? YOO nas. Still, in the US, it’s Jonas, as in brothers, and nicely wearable.

Kai – We tend to think of Kai as Hawaiian, but it can claim Scandi heritage, too, via a nickname for lots of longer names. It’s also spelled Cai, but in the US, I think the K is the better option.

Leif – It can be pronounced to sound like leaf, or to rhyme with Rafe. Either way, it’s a handsome rarity that brings Old Norse heritage to the New World.

Soren – A Danish spin on Severus, made familiar by the philosopher Kierkegaard, Soren fits right in with so many two-syllable, ends-with-n boy names, and yet it’s a little bit of a stand-out, too.

So many popular girls’ names in northern Europe are the same as the US – Alice, for example. At the other extreme are names like Wilma, that we all recognize – but probably few of us would consider for a daughter. These might be a little more wearable.

Britt – We’ve named boys Brett and Brent, but Britt comes from Bridget, and it remains unisex in the US – though it’s so rare that it’s almost a non-issue.

Lark – It’s spelled Laerke in Scandinavian countries, but I’m intrigued by the success of this avian name. It might feel too different compared to Greta, Ingrid, Elsa, and Anna, though.

Liv – Olivia is a chart-topper, and Liv might sometimes be short for that oh-so-popular name. But it stands on its own, too, tied to a Norse name meaning protection and coinciding with the more modern Scandi word liv, which means – appropriately – life.

Maren – Singer Maren Morris has helped take this name into the spotlight. But it’s been around for years. It’s considered a Danish form of Marina, but Scandinavian countries gave us Karen and Katrin and Elin. It’s possible Maren evolved from other Mar- names, too.

Siri – If only Apple’s virtual assistant had another name! Siri comes from Sigrid – beautiful victory. It could – should? – be gaining more attention right about now. And I think it could still work – after all, everyone recognizes the name instantly.

Thora – Cora and Nora both rank in the Top 100, and we’re wild about Thea. So why not Thora? It’s another ends-with-a name, true, but I think it might be perfect for your daughter.

Overall, I love Conrad best from your original list for a boy, better than any of my suggestions.

For a girl, I think Maren might be exactly right. It’s feminine, but not frilly. It keeps Ingrid company as a non-a ending name. (Is that important? Maybe … some kids will never notice it; others will see it immediately and find it terribly unfair. It’s impossible to say which side your kids will come down on, but if it’s on your radar, it’s worth addressing – if possible.) Plus it’s clearly borrowed from northern Europe, while still being accessible to English-speakers.

Okay, readers, over to you: what would you name a brother or sister for Anna, Elsa, Greta, and Ingrid?