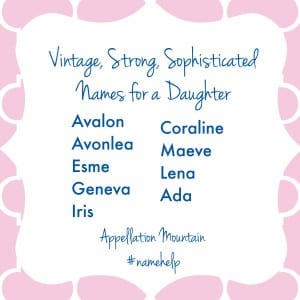 We’re relying on thoughtful ramments from the community to help expectant parents narrow down their name decisions. Thank you in advance for sharing your insight!

Our first baby – it’s a girl! – arrives soon and my husband and I are still struggling over a name.

We love vintage names but they seem to be rising in popularity to the point we are getting turned off to them. Ava was high on our list but taken off for this reason. We also love Adaline but worry it might not be a strong enough name.

We want something sophisticated and gentle, yet strong.

Please read on for my response, and leave your helpful suggestions in the comments!

Congratulations on your first baby – so exciting!

It is challenging when the names that you love are the same names that everyone else loves, isn’t it? 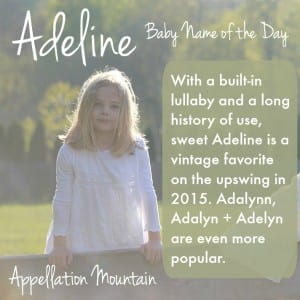 Adaline is lovely. And while it’s sweet and vintage, I do think it’s plenty strong, too. My hesitation around Adaline is how very, very popular Addie names are nowadays. Addison is #24, Adalynn is #128, Adalyn is #152 … and so on!

Ava, obviously, is gorgeous and glamorous and a Top Ten fixture.

But Mira, Vienna, Wren, and Dagny go in a very different direction. They’re strong names, and feminine – but pretty rare. Mira ranked #613, Wren #703, and Vienna and Dagny are outside of the Top 1000.

Vienna and Wren also make me think that “vintage” is a style indicator for you, not a strict rule, since place names and nature names are at their most popular now.

And yet it does seem like you have a good handle on what you don’t want – there are no surname names on your list, no names more traditionally heard for boys, and nothing that’s invented.

So let’s find something rare and with a certain amount of vintage style.

Avalon or Avonlea – They’re both place names, originally from fiction. Avonlea is, of course, the home to Anne, as in Green Gables. Avalon is from Arthurian legend, and now it’s the name of a California town, too. They both pick up on Ava’s ‘v’ sound, but go in very different directions.

Esme – Yes, this name is used for a character in the Twilight series. But long before that, Esme was a JD Salinger character. It seems a little bit softer than Dagny, more vintage than Vienna, and yet, a little more spirited and strong than sweet Adaline, too. It can be spelled Esmé, with the accent, but it isn’t necessary.

Geneva – If the ‘v’ sound appeals in Ava, and you’re drawn to place names like Vienna, what do you think of Geneva? It has a longer history of use than many places names – former First Lady Mamie Eisenhower was born Mamie Geneva Doud. Sound-wise, it brings to mind popular names like Genevieve, but it’s relatively unexpected. And I think Geneva’s ties to Switzerland give the name a very specific image. It’s hard to picture the Alps and not think of words like enduring and strong.

Iris – Lily is lovely, but Iris strikes me as a nature name with a certain amount of steel. Credit goes to Iris Murdoch and the 2001 Oscar-nominated biopic with Judi Dench and Kate Winslet. 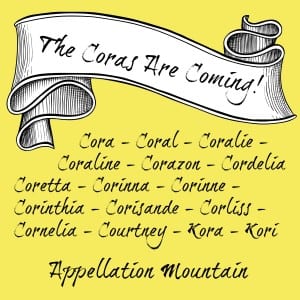 Coraline – There are lots of ends-in-line names for girls, and not all of them feel as popular as Adaline. I think Coraline might be an intriguing possibility for you. The Tim Burton character lends this name some edge, and the ‘core’ sound has a certain strength. It comes from the Greek kore – maiden, and it sounds like the word core – center – from the Latin word for heart. One downside? Cora, Cordelia, and other Cor- names are on the upswing at the moment, so we could hear a lot of them in the coming years. And yet, Coraline ranked a mere #629 in 2014, so it’s far from overused.

Maeve – You haven’t mentioned if you have an interest in names from certain backgrounds, but if Irish has appeal to you, what do you think of Maeve? It’s more accessible than Saoirse or Niamh, and in Irish myth, Maeve was a warrior queen. It reminds me of two names on your list – Ava and Wren, as it has the long ‘a’ sound, the letter ‘v’, and a short, tailored feel.

Lena – One of Mira’s strengths is that feels nicely global – it’s heard in many languages, and easily understood in many others. If Mira isn’t quite the name, I wonder if you’d consider the equally portable Lena? It’s currently big in Austria and Poland and France. Spell it Lina and it also has ties to India and the Arab-speaking world. In the US, it ranks #279 as of 2014, and fits right in with popular girls’ names like Emma and Lily.

Ada – Take Ava and Adaline, and it’s hard to overlook Ada. Like Mira and Lena, Ada is remarkably portable and pan-European. Spell it Adah, and it’s also an Old Testament name. And I’ve heard Ada used as an Igbo name, taking it all the way to Africa. So Ada is well-traveled, but it also feels distinctive and strong. One famous bearer? Ada Lovelace, early nineteenth century British mathematician and pioneering computer programmer.

It’s hard to choose a favorite, and I’m tempted to try to talk you into Mira, from your original list, as it seems to hit all of the marks.

But if not Mira, I like the idea of Iris, Esme, or Coraline. Or maybe even Cora? I think they’re all vintage names with a lot of strength and positive associations, and while they’re familiar, they’re not nearly as popular as some of the names that you’ve ruled out.

If none of these quite hit the mark, I wonder if you might like the names on these lists: The Hermiones, Part I and Part II, or The Eleanors, Part I?

Readers, what would you suggest to J. for her firstborn daughter?