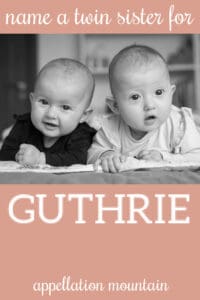 I’m a 40-something newlywed, thrilled to be expecting for the first, and, given our ages, probably the only time. Even better? We’re having boy-girl twins.

Before we knew we were expecting two, we’d planned on naming a boy Guthrie. It’s a family surname on my side, with lots of meaning for us. (And for my mom.)

But there’s no similarly meaningful name for his sister.

Here are our best options:

Edie/Edith – A friend suggested this idea from my first name, and I love it. Except then there are two names from my family and none from my husband’s side. Does that matter? Also, he likes Edie but not Edith, and I’m not sure how I feel about that.

Kirby – His mother’s maiden name. I love that the names would have similar weight, and kind of the same style. But somehow Kirby sounds very 80s to me? I can’t exactly explain why, but it just doesn’t feel exactly right. I want to get over this, though, because it’s the best equivalent of Guthrie from his side.

Lou/Luna – My father-in-law is named Lou. (It’s not short for anything.) We thought about Guthrie Louis for our son’s name. But now I’m wondering if a name like Luna is enough of an honor name? I don’t like the “weeze” in Louise/Louisa, but I’m also not sure about how popular Luna is right now. It’s also my sister’s bulldog’s name. Is that a problem?

Mary – There are Marys on both sides of our families, with lots of Mary Annes, etc. I just don’t love it.

Olivia – My husband’s favorite right now. The only other family name on his side that has meaning is Oliva, so Olivia could be great. But I don’t like that it’s the #1 name, especially when Guthrie’s name would be so different.

Because we both have short last names, we’re (all) hyphenating. It sounds sort of like Kane-Smith. We really haven’t thought about middle names, except maybe Louis with Guthrie.

I often want to reassure parents that it won’t be the end of the world if one child’s name is more significant than the others. For lots of reasons, we often use That Big Honor Name on our firstborn and then feel like we’re able to name our younger children more freely.

But the stakes feel a little higher with twins, don’t they?

And I do think it’s not quite fair to give one twin a super significant, meaningful name and the other one that you just like – especially when it’s likely to come up. (Since Guthrie is, as you say, a little bit on the unusual side, chances are that people will ask.)

I got the exact same ill-defined 80s vibe from Kirby, but couldn’t figure out why. My first thought was St. Elmo’s Fire, but the numbers didn’t add up. (Though Emilio Estevez did play a character named Kirby.) Nope, instead it was Dynasty. The era-defining prime time soap introduced Kirby Anders in 1982. The name quickly spiked in use for girls. And yes, the character returned in the recent CW reboot. While I hear what you’re saying about the name balancing so well with Guthrie, it also sounds like you don’t love it as a first.

Is Luna an honor name for Lou? I can’t see why not. That applies to Lula, Tallulah, and maybe a dozen other names with a strong Lou sound, hold the weeze. The bulldog factor isn’t ideal, but it wouldn’t necessarily be a dealbreaker if this was your absolute #1 favorite name. (Though it depends on how close you and your sister are, and whether kid Luna and canine Luna would spend time together. And, of course, how your sister might feel about the duplication.)

We don’t use Mary nearly enough, which makes it a great, classic name that’s surprisingly uncommon. And yet, it doesn’t sound like this is a fit for you.

I agree with you both: Olivia is a brilliant play on Oliva. And it’s wildly popular, too. While that wouldn’t matter if it really were your favorite, it doesn’t sound like that’s the case. Would you feel differently if you use the name Olive? Or even Olivine/Olivette as middles?

I wonder if the best solution is to use Kirby as a middle name?

I’m wild about Edith “Edie” Kirby and Guthrie Louis. It feels like a great mix of family names, but also names that please you. And while honor names are great, it’s important to find something that pleases you, too.

Olive Kirby could be great, too, as I do like Luna Kirby – though the canine cousin is a potential challenge to consider.

And Edie Olivine or Edie Olivette could have possibilities.

But the first idea is a my favorite. Edie Kirby sounds a little sing-songy, but Edith Kirby called Edie is great.

Readers, what would you suggest for Guthrie’s twin sister?