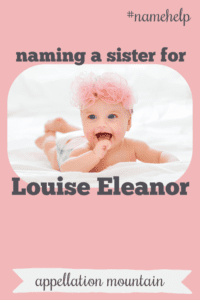 We have a daughter named Louise Eleanor, sometimes called Lou and Lulu at home, but usually Louise by everybody else. Finding her name seemed easy. It was traditional, but we didn’t know any other girls with the name. But no one thinks it’s weird, either.

Now we’re expecting a second daughter this August and feeling stuck. We’d like the same kind of name this time, but we’re having a hard time finding one that fits.

Here are the names we’ve considered, but have ruled out:

Any R name is also out, because our surname is hyphenated, and sounds almost like Rooney-Rosh. The only R name we really thought about was Rose, for my grandmother, but it’s too much R.

So we’re looking for classic, nickname-proof, and not too common, right? Too bad about Helen, because that was my first thought.

Because we’re looking for something less common, I’m going to avoid all Top 100 picks – though I don’t think that’s necessarily a rule you need to follow.

Beatrice – Lovely Beatrice nicknames abound, but none is required. Like Louise, Beatrice is the kind of name that everyone knows – but relatively few families are using. It currently stands at #573, a little more popular than #800 Louise, but not by much.

Edith – At #518, Edith is the same popularity range as Beatrice. You could use sweet nickname Edie the same way that you’re using Lulu and Lou, but Edith is a short, strong name that requires no shortening.

Florence – There’s a strength about Florence – maybe thanks to Nightingale – and a romance, too, probably from the fabled Italian city. Like Louise, it’s a former favorite that left the US Top 1000 for some years. Now it’s back, at #971.

Frances – Louise and Frances sound like sisters to me. At #445, Frances counts as a name everybody knows, but few of us are using.

Jane – The thing about Louise – and Alice and Eleanor – is that there’s a tailored restraint to these names. Jane shares that quality. At #291, it’s more popular than many on this list, but still relatively uncommon.

Marie – Want to do something crazy? Name your daughter Mary. Yup, the former #1 name has been out of the Top 100 for years. But Marie – the French form – is even more rare. And while lots of women are Ashley Marie or Olivia Marie, almost none answer to it as a first name. It ranks just #576.

Simone – The other thing about Louise is that it feels subtly French. So does Marie … and Simone. At #733, it’s pretty uncommon.

Sybil – Despite the broad appeal of Downton Abbey, and beloved mother-daughter characters named Sybil, this name remains unranked in the US. I think it’s a great stands-out, fits-in choice.

Teresa – It seems like it would be more popular, but this is the only spelling currently ranked in the US Top 1000 – and that’s at #798!

My favorite with Louise Eleanor is probably Jane. Maybe Jane Florence? Or Edith. I love the idea of Edith Simone – slightly French, just like Louise, and traditional without being too expected.

Let’s open it up to the community, because I feel like I’m missing dozens of possibilities.

Readers, what would you name a sister for Louise Eleanor? 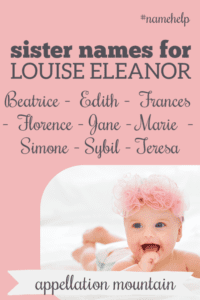