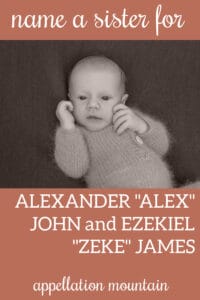 We have two boys, Alexander “Alex” John, 7, and Ezekiel “Zeke” James, 5. After thinking our family was complete, we’re expecting our third (and this time definitely last!) baby) early in the new year. It’s a girl!

With both of our boys, our girl name was Olivia Mary. Much as I still love the name, I don’t think it’s right for us anymore. We’ve heard it a lot, and there are Olivias in both of our boys’ classes this year. Maybe I’ve just sort of moved on. My husband is happy to still use Olivia, but he’s open to other names, too.

Here are the names that we’re considering now:

ELIZA – Except I don’t like the nicknames Ellie or Lizzie, and I love the way our boys have nicknames. (Olivia would’ve been Livvie.)

NORA – It just sounds so simple next to Alexander and Ezekiel, right? My niece is Eleanor, so that’s out, and I think Eleanora would be too similar, too. Someone suggested Honora or Annora, but they’re not really us.

VIVIAN – I do like Vivi, but Vivian is just kind of okay for me. Our last name is similar to Johnson, and I don’t like the N-N ending sounds.

Olivia could be the perfect sister name for Alexander and Ezekiel – Alex, Zeke, and Livvie. But I hear what you’re saying. After a few years, sometimes a name that we haven’t used just feels like it belongs in the past.

Plus, Alexander and Ezekiel are names with lots of sound. They’re not really different, exactly – but they’re distinctive choices. A name like Nora does get a little lost next to them, though it sounds more balanced with Alex and Zeke.

So let’s see if we can find some fairly mainstream names with stand-out sounds. We’re looking for something a little longer, with a sparky nickname, too.

A SISTER FOR ALEXANDER “ALEX” AND EZEKIEL “ZEKE”

An obvious substitute for Olivia, Cecilia is popular and traditional, but a little less common. I think Cece goes beautifully with your boys’ names.

We all recognize the name Cordelia, but it’s currently outside of the US Top 1000. Nickname Cora makes it even more accessible.

Since you like Vivi, but not Vivian, would the same nickname work for Genevieve? Or maybe another name with a strong VIV sound? There’s always romance language Viviana.

The first name that came to mind. Spirited nature name Juniper is actually in the US Top 200, and has more history than you’d guess. Nickname Junie is warm and high energy, but still traditional.

Or Miriam called Mimi. Or Miri! There’s whole cluster of names related to Mary and Mary Anne with lots of potential. I think Marianne feels like an enduring choice, though it’s currently outside of the US Top 1000. Mariana is more popular.

Along the same lines as Marianne, would you consider Rosemary? It’s delightfully old-fashioned, but nickname Romy is all kinds of modern. Rosalie called Rosie is another good choice.

There are a surprising number of nicknames for Theodora. I like Tess best with Alex and Zeke, but you could easily consider Thea, Thora, or any of these possibilities. My one hesitation with Tess, of course – maybe it’s too close to your name?

A quirky classic, Veronica has history to spare and an arresting, unforgettable sound. But we don’t think of it in the same category as Margaret or Katherine, and I think that makes it a perfect sister name for Alexander and Ezekiel. My favorite nickname is actually Vica, but Vera might be the better choice for your family.

Juniper was my very first thought, and I’m still a fan. Except I’m not sure if it would clash with your sounds-like-Johnson last name or not. If not Juniper, I think I’d vote for Veronica called Vera.

Readers, over to you. What would you name a sister for Alexander “Alex” and Ezekiel “Zeke”?