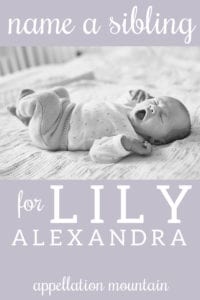 We have an almost three year old daughter named Lily Alexandra and are our second child is due near the end of this year.

I picked out our daughter’s name when I was about seven. But it turned out to be the perfect name! My husband is Alex, and he really liked the name Lily as soon as I suggested it.

Choosing her name was so easy that we never really talked about other names.

It turns out we don’t agree on anything!

I guess there’s lots of time still, and we will find out the baby’s gender later this summer.

The baby’s last name will be similar to Harrison, but with a ‘d’ sound in the middle.

How exciting to be expecting your second!

Does it help to know that this is a super-common dilemma? Often that first name is set in stone. And the second name? It takes us by surprise. Naming is the rare parenting responsibility that seems to increase in difficulty even as we become more experienced at everything else.

Instead of talking about specific names, you might try:

But you’ve already got some maybe names, so let’s see take a look at those, too.

A BROTHER FOR LILY ALEXANDRA

You’ve considered Isaac, Ezra, Oliver, and Caleb – all great names for Lily’s brother. I’m not sure if Taylor is a preferred for a daughter or a son? I’m going to take it as a signal that you’ll consider at least some surname names.

It sounds like your favorites are likely to be around the Top 100, though maybe not the very top of the list. They’re traditional choices with roots, but not quite as classic as Charles or David. And while it’s tempting to delve into more Old Testament names, I’m guessing that simply reflects some of the choices in favor right now. So we’re mainly looking for a current name. That’s a broad definition, so no surprise you’re struggling to narrow it down!

CARTER #33 – Sound-wise, it’s sort of midway between Caleb and Oliver. I started out with Carson, but with a -son ending surname, that’s not ideal.

JUDE #154 – Another Old Testament possibility, with a modern sound.

LUKE #31 – With Lucas in the Top Ten, Luke might be too popular. And how do you feel about Lily and Luke? Is the shared initial a bonus or a problem? Still, I think I can imagine this working really well.

OWEN #22 – A modern favorite with just enough history, I think Owen has the same complete, brief appeal as Lily.

SILAS #100 – A New Testament name, but I think it’s similar to Isaac and Caleb.

THEO #172 – Theodore ranks #23, so that’s an option, too. But Theo sounds bright and upbeat, a logical brother for Lily, whether it’s a nickname or a formal name.

I’m also tempted to suggest the middle name Julian, which rules out Jude – which is too bad, because it’s great! So my favorites are probably Theo Julian or Chase Julian.

A SISTER FOR LILY ALEXANDRA

Maybe there’s a slightly broader range in your favorite girls’ names, but I think there’s still plenty of overlap – and the same basic brief as your boys’ names.  Your current list is Cora, Clara, Madeline/Maddie, Zoe/Zoey, Leah, Faith, and possibly Taylor.

ADA #184 – Ava is a glamorous Top Ten name, while Ada is a little different – more of old-fashioned name, maybe a little homespun and just slightly under the radar.

EDEN #130 – A modern favorite, Eden and Lily feel subtly connected. After all, Eden is a garden.

GEORGIA #176 – George feels buttoned-down and classic. Georgia is equally classic, but with a little bit of kick.

JUNE #182 – Sweet and straightforward, with the same gentle, seasonal vibe as Lily.

MAYA #61 – Global-spanning Maya shares some of Lily’s best qualities. Both names feel timeless, and while they’re short names, they offer plenty of style and rich meaning.

RUBY #66 – A sparkly name, Ruby seems like an intriguing option for Lily’s sister. Though if you plan on adding to your family, you might feel like future daughters’ names also have to be nouns.

THEA #293 – I know you’re not wild about Leah, but would Thea be just different enough?

I’m going to suggest Juliet or Juliette as a middle name here, or maybe Julianne? My favorites are Maya Juliette and Eden Juliette – at least right now!

I know the readers will have more great suggestions, but let me leave you with one last thought. It’s always so difficult to compare a name that’s just on paper to one fully occupied by your beloved daughter. Chances are that any name you choose will be transformed the moment your new child is in your arms.

Readers, what would you suggest for Lily Alexandra’s sister or brother?