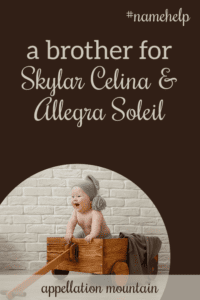 I wrote to you about a year ago when we were expecting our second daughter, Allegra Soleil, a sister for Skylar Celina.

We are expecting again and know it’s a boy, and my husband and I are having trouble deciding on names. I’m more comfortable picking something more common for a boy than I was with my girls. I like both Oliver and Logan and I usually shy away from the Top Ten. I still like Asa; it was on my list with my last pregnancy. Edward has been on my radar as a homage to my maiden name. Most recently Hugo has been too.

My husband isn’t thrilled about Edward as there is a famous person with the same first and last name. (We have a very common last name, starts with B, one syllable, ends in s – though I don’t think many people would even make the connection.) He thinks Hugo is “not bad.” So far, his favorite name is Gregory – which happens to be his name, too. I’m not opposed to Gregory, it’s solid and not overused but not unheard of, either. I would probably use Rory as a nickname to avoid confusion.

But I’m not sold on the name either. Please help!

I hear you on the not-Gregory. Except that I think Rory makes a genius nickname that fits with sisters Skylar and Allegra, avoids confusion with dad, and gives him a name all his own, too. And so that makes me think that maybe, just maybe, Gregory-called-Rory would be the best pick … especially if you get more say as regards the middle name.

That’s the other thing that leaps out at me: conventional wisdom says that we should focus on first names first, and fill in the middles afterwards. But for some families, names only click when they’re heard in combination. Given how gorgeous your girls’ middles are, I’m guessing you’re more of the combo type, maybe?

There’s one last thing I think we might want to consider. Skylar Celina and Allegra Soleil are both meaning-rich names, and they point look upwards – Skylar’s sky, of course, but Celina can mean heavenly. Soleil refers to the sun, and Allegra has musical associations, but ultimately comes from the Italian word cheerful. So, I wonder if a nature name matters, especially one borrowed from the sun, moon, or stars?

Let’s see if we can work with both your current shortlist and maybe a few new names to find something that’s perfect for Skylar and Allegra’s brother.

Corentin – An old name from Brittany, big in France in the 90s, but rarely used in the US, Corentin is rarer even than Allegra. It means storm, though, so I wonder if it fits with the skyward names shared by your daughters? Though it’s a far cry from Oliver and Logan, so maybe this is more of a middle.

Felix – Felix, like Allegra, means happy. It might seem a little bit different, but the name currently ranks in the US Top 250, and continues to climb.

Jasper – Another nature name, though Jasper refers to the stone. Again, it’s  more mainstream than you might guess, currently in the Top 200 and gaining.

Orion – I think this might be my personal favorite. It’s different, but right around #300 in recent years, which puts it midway between Skylar and Celina. It’s a constellation name, so that’s a good fit.

Neil – This is kind of out-there. Well, it’s not out-there at all. Neil and Neal were 1930s and 40s names, the kind of choices that belong to grandfathers, not grandsons, today. And yet, one of the possible meanings for Neil is cloud. (The other is champion, which is every bit as good!)

Okay, on to the combinations:

I could go on, but I find myself gravitating towards Gregory “Rory” Orion, or maybe Rory Edward? And if that’s not an option for you, then I love the sound of Gregory in the middle, with Asa, Hugo, Felix, or Logan as a first name.

Okay – over to you, readers! What would you name a brother for Skylar Celina and Allegra Soleil?

Image by reaklop2 from Pixabay