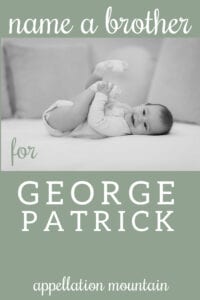 When our son was born, we didn’t agree on any names. The night before I went into labor, we thought of naming him after our two living grandfathers: Patrick and George. We flipped a coin to decide which name would be first, and George Patrick suits him perfectly.

Now our second son will be here in August, and we are stuck again.

We have a long list of girl names – Olivia, Mirabelle, Juliette – that we both mostly agree on.

Family names are sort of a problem. There’s Roger, Marvin, Harold, Bill (not William, only Bill), and Scott. They’re fine, but not for us. The only possibility is William (for Bill), but we’re not royals, so can we really name George’s brother William? It seems like too much.

My favorite name is still Cooper, but my husband is convinced it will be rhymed with poop. And even if I could guarantee that would never, ever happen, maybe he doesn’t really like the name much anyway, or maybe it’s too different from George?

Can you help us with some ideas?

It sounds like you freely chose to use family names for your first child – no pressure from relatives, right? And it sounds like you’ve equally honored his side and yours. Which makes me think you really, truly are free to go your own way in choosing this child’s name without regard to honoring family.

Except … that means there’s no easy answer to what to name this baby!

Not that your family names offer much in the way of easy answers, right?

If you felt strongly that you wanted to honor Bill with this son’s name, then I’d suggest you laugh off the British royalty vibe. But it sounds like William is just the best option you have on a list of names that don’t really seem to thrill you.

Next let’s talk about Cooper. I don’t think there’s any reason in the world that George and Cooper couldn’t be brothers. And yet, I agree. When one partner starts saying “but it sounds like …” that’s often a signal that the name just isn’t a favorite.

A BROTHER FOR GEORGE PATRICK

Andrew was a big hit in the 1980s, though it really belongs with classics like George. Of course, there is a Prince Andrew … but the connection seems much fuzzier and less likely to come to mind.

A surname name in the key of Cooper. It may be that your husband isn’t crazy about surname names in general, or it might be that running through more options will lead to the right name you both love.

Another Cooper alternative, near the top of the popularity charts. That might help it feel like a solid choice for a son, rather than a trendy one.

A little more sound than just John or Jack, but every bit as classic.

If you love Juliette for a daughter, why not Julian for a son?

By that same logic, I think Oliver makes a perfect brother name for George – and you already have Olivia on your girls’ list. Plus, Oliver feels like the middle ground between William and Cooper.

An overlooked classic, you might spell it Steven … or stick with the ‘ph’ but pronounce it more like Stefan. My favorite for you is Stephen with the ‘v’ sound, though.

Another classic choice, a logical brother for George, but with no royal ties.

You might consider a family middle name to round things out.

I think there are plenty of options that feel traditional and well-matched to George Patrick, but don’t necessarily need to be straight-up family names, either.

Readers, over to you – what would you name a brother for George Patrick?