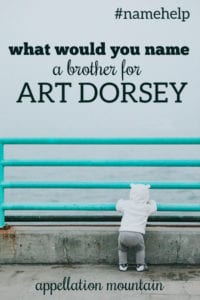 I’m expecting my second son in the next six weeks or so and my husband and I are at a loss for names. All we have so far is the short list of names leftover from our first.

Our first son is Art Dorsey. Names we both tend to like are short, easy to pronounce and spell, aren’t too popular, and are what would be currently considered as grandparent-chic.

First names that we were considering before that could be back on the table would be Gus, Gil, Jude or Dewey. Other names we both might like are Linus, Amos, or Mack.

Middle names still evade us. Maybe it is hard without the first narrowed down more. But I tend to test middle names out like Lavern, Turner, Roe, Casper, or Palmer.

Also, my husband and I have different last names and neither of us have strong feelings either way about which last name to give our children. So far we are just going with sounds better with the first name. Our first took my husband’s two-syllable, starts with an R, ends with a -k sound last name. But mine, which starts with a McD and ends with a vowel sound, could also be in the running again.

For example, we’ve had a girl name that we both love picked out for a long time now, which is Mabel McD. Maybe someday we’ll have a girl, but for now these boy names are harder for us to find something that really strikes us. What would you recommend? I appreciate your insight!

Art Dorsey is a brilliant first-middle combination. I sort of want to add “and his Orchestra” when I hear it. The name feels early twentieth century retro, jazzy, cool. But it’s rooted in tradition, and no one could argue that Art feels like it’s trying too hard.

No wonder it’s tough to name his brother!

Gus and Jude seem perfect on paper, but they’re probably both much more common than Art. At least, Jude certainly is, and with lots of little boys answering to August and related names, Gus feels like it must be, too.

Gil, Dewey, Linus, Amos, and Mack feel closer to the mark. I feel like Lavern, Turner, Roe, Casper, and Palmer could all make great middles, but it can be challenging to choose a middle when the first remains unsettled.

So let’s look at some fresh options for firsts.

Dex – We’re mad for Max and Jax, so why not Dex? Like those other names, it’s just three letters, but X offers a lot of sound. It could be short for Dexter, of course, but I think it stands on its own, too.

Frank – Here’s the beauty of Frank: like Art, it’s a nickname, in this case for Francis. But unlike Art (or Gus or Gil), it feels more like an independent name. If you named your sons Art and Gil, I wonder if you’d feel trapped into a three-letter, nickname-name pattern for a third son. Art, Frank, and Mabel sound like my great-great-uncles and aunts, a generation that’s just far enough in the past to sound fresh and stylish once more.

Ike – I can’t decide if Ike is the exactly perfect match to Art … or a little too close. I do think it’s the kind of strong sound that fits right in on your list, though, so I’m leaving it on the list.

Lyle – It’s close to Linus, but a little bit different, too.

Ray – I’m applying the same logic as Frank here; it’s a short name that stands on its own better than some. Plus, the image of a ray of light makes it bright and upbeat, while accomplished men like Ray Charles make it feel jazzy and cool.

Roscoe – Is Roscoe too far out? I pulled it from this list of 1919 boy names. I think that ‘o’ ending makes it quite current, even though it’s definitely borrowed from another century.

Overall, my favorite is Ray Turner. It matches Art Dorsey very well, but the sounds are distinct. And I think it picks up the right vibe, too: grandpa-chic, but short and easy to spell and pronounce.

Readers, what would you name a brother for Art Dorsey?