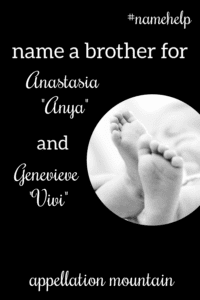 We have two daughters, Anastasia Grace “Anya” and Genevieve Adele “Vivi.” Last year, Anya told me there was a baby brother in my tummy. Turns out she was right!

I’m a little lost on boy names, maybe partly because while I’m confident in what I like in girls’ names, I’m struggling to define or explain my boy name preferences. They feel pretty eclectic by comparison.

His middle name will almost certainly be Arthur, a family name. (We don’t like it as a first.)

We also have a niece who passed away recently. We’d love to honor Peyton, if possible.

I have a giant list of names that I whittled down to fifteen. But that list feels like it changes minute to minute. My husband’s list of four or five names has all been crossed out for one reason or another.

These are more guilty pleasures or possible nicknames:

I still LOVE a lot of the names on the list, but haven’t gotten “that feeling” that THIS one is it yet, which makes me wonder if there is a name I haven’t considered.

My husband is happy with Alaric and it’s not that I’m not. But I’m second guessing it.

What a great story to tell your son someday – that his sister knew about him first!

I hear what you’re saying about not knowing your style. It’s easy to get hung up on the question, of course. But it’s also tough to feel like any name could be on your list.

Here’s what strikes me about your girls’ names:

It seems like you might like boys’ names that fit this same general pattern: rooted in history and broadly familiar, but not too popular; nickname-rich but not so elaborate that the full name feels burdensome.

On paper, Alaric sounds like a brother for Anastasia and Genevieve. Except. I can’t figure out how to shorten it. Al? Ricky? Rico? Lars? They’re all plausible, but not as automatic or perhaps even as appealing – at least for me – as Anya and Vivi.

And so I wonder if that’s why it’s never quite clicked?

I’m going to take another pass at your long list, and see which names best fit the same general guidelines as Anastasia and Genevieve. I’ll add in a few more, too.

All of this – the meaning, the nickname, and the name’s familiar-but-uncommon status – but Zechariah at the top of my suggestions list.

But if that’s not quite right, I’m most tempted by Callahan called Cal, and Lucian called Luc or Luke. I think any of the three work well with Arthur as a middle name, though Lucian Arthur might be my favorite.

Let’s turn it over to the readers, because I know they’ll have all sorts of great suggestions, too!

Readers, what would you name a brother for Anastasia “Anya” and Genevieve “Vivi”?