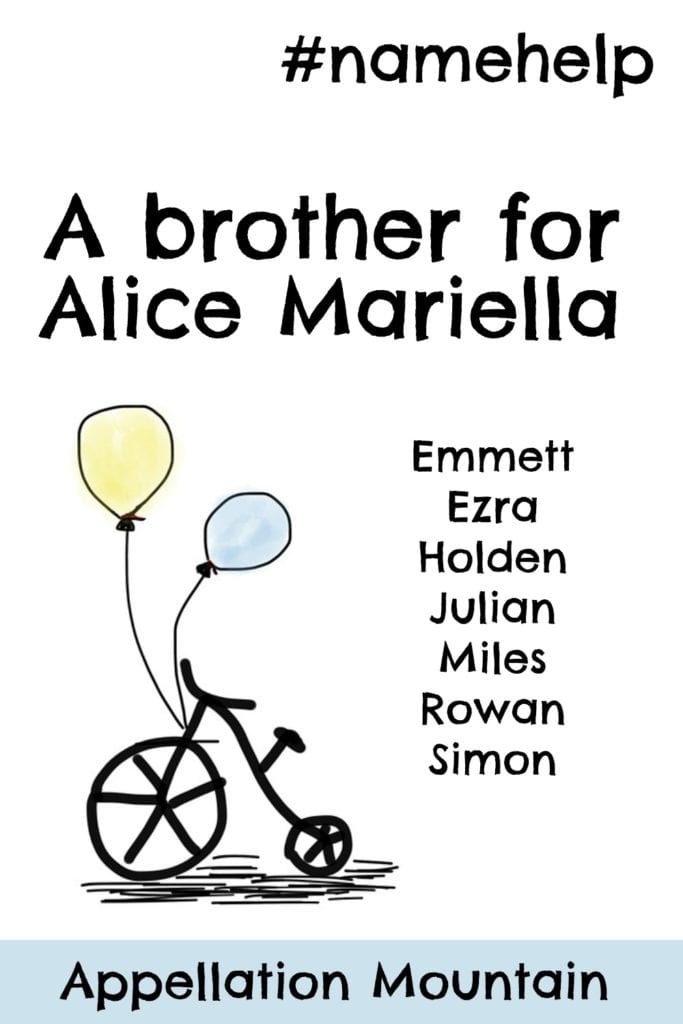 We have one daughter. Her name is Alice Mariella.

Girls’ names came easy to us. Now we’re expecting a son, and with boy names we are having a much harder time.

These are some we like, but something just doesn’t seem right about them. Would you be able to suggest some similar ones?

It also strikes me that your boys’ shortlist all sounds quite right with big sister Alice.

Here’s how I would describe your ideal name:

So let’s see what other boy names meet these general guidelines:

Emmett – Don’t Alice and Emmett sound right together? Full disclosure: I’m not the first person to think so. Stephenie Meyer gave those names to two of her vampire siblings in Twilight’s Cullen family. Still, this feels like a relatively obscure reference – and will be more so as the supernatural romance fades into pop culture history. Both names feel traditional, with a sweet simplicity about them. Sound-wise, Emmett combines Emerson’s Em with the -t ending of August and Everest.

Ezra – I think Ezra meets your criteria, but goes in a very different direction, sound-wise. If boys’ names ending with -s, -n, and -t are falling flat, maybe a name like Ezra would appeal.

Holden – Like Nolan, this name comes with a long ‘o’ sound. Literary Holden feels slightly more modern than August or Orsen, and yet it has no shortage of history. As a surname, it refers to a valley. We think first of The Catcher in the Rye’s Holden Caulfield. It’s become a mainstream favorite since the 1990s, less tied to the literary character with every passing year.

Julian – As ancient as Atticus, Julian feels more mainstream. Names like Atticus (and Holden) owe some of their use to a literary figure. But Julian is just a name with millennia of use behind it – there’s an emperor, a saint or three, and dozens of others. Alice and Julian make a nice duo – they’re familiar choices that are nickname-proof and distinctive.

Miles – My first thought was Silas, but Alice and Silas repeat a lot of sounds. Instead, would you consider Miles? As with Ezra, it’s different from the names on your shortlist. But it feels similar to Alice – a modern favorite with deep roots.

Rowan – Like Alder, Rowan comes from a tree name. It strikes a good balance between the more modern picks on your list (Colton) and the most vintage (Orsen). One note: Rowan is used in significant numbers for boys and girls alike, so this is a unisex name. That’s less of an issue than in years past, but it’s something to know going in. Two similar names that are almost exclusively Team Blue are Owen and Ronan.

Simon – It also strikes me that some of these names aren’t quite as buttoned-up as storybook Alice. I wonder if Simon would appeal? It has the same sophisticated, classic vibe. Simon is unlikely to be shortened, and does a nice job of fitting in and standing out.

Readers, I would love to hear your thoughts. What would you name a brother for Alice Mariella?