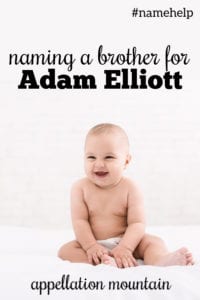 UPDATE: He’s here! Welcome Peter Wesley. Scroll down for some thoughts from Stacy.

When we were naming our first son, we had a lot of rules. No nicknames, no family names, nothing too hard to pronounce or spell. Something with history, but not like a William-James-David kind of super-traditional name. No Top Ten names, but nothing weird, either.

After months of looking, we found the right name: Adam Elliott. It works well with our long, hard to spell and impossible to pronounce last name, and I like that everyone knows it, but we don’t hear it a lot, either.

If this baby was a girl, we were thinking of Ruth, but hadn’t really settled on it. And we’re not sure about using another name that seems so Biblical. (We’re not especially religious.)

Avoiding a clearly Biblical name would probably be best. Also, I’m reluctant to choose a hipster name. Walter and Clyde and Alfred almost seem like the right kind of name, except I think they feel sort of cool, and that’s not what we’re going for, either.

I think I hear what you’re looking for: the elusive normal name. They’re easier to come by for boys than for girls, probably because names for girls tend to trend in and out favor just a little more quickly. (Though that’s changing!)

The trouble is that there’s really no such thing as a normal name. Walter and Clyde and Alfred ought to qualify, but I know what you mean. I expect to stumble on those kids in certain neighborhoods in Portland or Austin or Brooklyn. They’re great names, but names with a certain style, right?

Instead, let’s look at this list: Sweet Spot Boy Names.

A bunch of these – like Jonah and Jude and Kai – probably fall short of some of your criteria. But that still leaves:

Graham – The name has been around for ages. It’s a Scottish surname, in heavy use as a given name long before we all decided to name our boys Mason and Carter.

Hugo – The ‘o’ ending makes Hugo a little more stylish, but only a little. This is a rock solid choice, traditional but current. And the meaning is marvelous: heart.

Malcolm – I suppose Malcolm often becomes Mal. Or Cole or Colm. But I think it would be pretty easy – maybe even automatic – to say Malcolm in full circa 2019.

Simon – Like Adam, Simon comes from the Bible. But neither name strikes me as particularly religious … more in the overlooked traditional names category.

Speaking of traditional, maybe we should stick to something more classic? There’s overlap across the lists, of course.

George – The future British monarch gave this name a tiny boost, but it remains just outside the US Top 100. (In fact, it’s hovered there for a few years.)

Patrick – Parents likely avoid Patrick because Pat feels like a nickname from another age. But Patrick in full works wonderfully well today. And the few little Patricks that I know all go nickname-free.

Peter – Like Simon, it’s clearly drawn from the Bible, but doesn’t feel like a spiritual choice. And, like Patrick, I tend to hear it used in full. After all, this is the era of Hunter and Parker and Carter. Peter makes more sense than Pete.

Vincent – Like Adam, Vincent doesn’t exactly feel fashionable. No celebrities are using it. It’s not racing up the popularity charts. But that’s what makes it so perfect, right? Men of distinction – saints, artists, athletes – have answered to Vincent. And while I like Vincent best in full, I wonder if Vince would appeal? It’s one of those nicknames that’s quite faithful to the original name.

My picks are Graham and Patrick. I think they hit the right note: familiar, traditional but not too buttoned-down, unlikely to be shortened, and they don’t sound like they’re straight out of the Old Testament.

But I know readers will have some great suggestions. And so let’s open this up: What would you name a brother for Adam Elliott?

UPDATE: He’s here! Stacy writes “We loved Ian, but not with our last name. He was almost Paul until he was born, but something about it didn’t feel exactly right. After lots of back and forth, we went back to this list and decided to name him Peter Wesley. It suits him perfectly. Thanks for all of the help!”