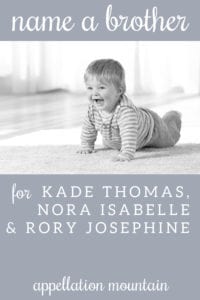 I am expecting a baby boy in July.

We want to use the name “Monroe” in his name but aren’t sure if we should break from the 4-letter first name pattern.

We need help finding a 4-letter first name that would go well with Monroe as a middle name.

If you can help, I would appreciate it!

Before I ask whether you should break your pattern, let me be nosy: do you imagine you’re likely to have more children? Because if this child almost certainly completes your family, I’m inclined to stick with four-letter names. They’re abundant, and it’s easy to come up with a dozen that would wear well. So it feels like sticking with the letter count serves as a useful filter for possible names.

But … if you can imagine adding three or four more children to your family? That four-letter rule might feel limiting. Yes, choices abound. But it’s not as easy when you’ve already used your five or six most favorite four-letter names.

I’m going to stick to four-letter names for my suggestions, because I found plenty that would be great with Kade, Nora, and Rory plus middle name Monroe.

Alex leans pretty traditional, but so does Nora. I also like that it’s on the gender-neutral side, just like Rory. But if you’re looking for a more modern possibility, Axel might appeal.

I tend to list Chord with the musical names, but Cord – as in rope – works every bit as well.

Strictly speaking, Jove is another name for Jupiter, the king of the Roman gods. Except I don’t hear it as a mythological name. Or maybe I hear it like Atlas and Orion – very wearable, modern-sounding options.

Presidential surname Lincoln is having a moment, so why not Link? It’s a little Legend of Zelda, but in a good way.

How do you feel about repeating initials? Because Nate seems pretty perfect, if Nora doesn’t mind being one of two Ns.

Okay, same question with Rory. Rafe is often short for Raphael, but I like it on its own, especially as a brother for Kade.

Reid strikes a good balance between all of your kids’ names, I think.

An Irish surname name with a baseball vibe.

I’m most drawn to Alex Monroe – or maybe Axel? – with Cord as a close second.

But I know there will be some great suggestions to consider.

Readers, what would you name a brother for Kade, Nora, and Rory? Four-letters optional, but the middle name Monroe is a must.