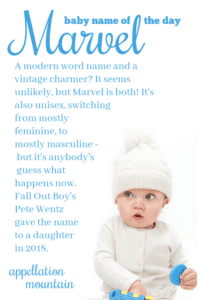 Marvel sounds like one of those only-in-Hollywood, what-were-they-thinking choices. Except it carries far more history than you might guess.

Celebrity Baby Names Week 2018 continues with the name Pete Wentz chose for his daughter in the spotlight.

The word comes from the French merivelle, meaning something that causes astonishment, a surprise, a wonder.

We can trace merivelle back to the Latin mirabilis – wonderful. Similar words appear in plenty of romance languages. The word as we know it today dates to around 1300, and it can be used as a noun or a verb.

It’s not exactly a virtue, at least not in the conventional sense. Like Maverick and Legend, call it an epic name instead.

Most of us today might think of the Marvel Universe first and foremost.

Founded as Timely Publications, the comic book company changed its name to Marvel in 1961.

Today it’s far more than comics. Some of the most successful superhero movies of our time come from this group, including Black Panthers and Avengers: Infinity War.

That all makes Marvel a household name, but perhaps takes it farther from first name status.

Long before there was such a thing as a comic book, this one existed as surname, at least some of the time.

Like the noun, the surname referred to someone considered extraordinary. Or maybe someone so much the opposite that it became a cruel nickname of sorts. There were also places called Merville and such that also led to the surname, probably not related to the Latin word.

Despite all of this quirky history, it’s worth noting that Marvel charted in the US Top 1000 for girls most years from 1889 through 1941.

That’s a long stretch, much longer than many a more conventional choice.

Interestingly, it’s used far more heavily for girls early years. But as the name’s use declined, it started to go blue. While it’s nearly unknown in the twenty-first century, odds are that a Marvel born today will be a boy. More on that in a minute.

For now, let’s look at a few famous women by the name:

In every case, it appears to be her birth name.

One more example of the name’s mainstream status?

Jane Trahey penned her memoir, Life with Mother Superior, about her time at a Catholic girls’ school in the 1930s. It became a 1966 hit comedy starring Hayley Mills, known as The Trouble with Angels. There’s a character in the movie known as Marvel-Ann.

I couldn’t confirm if the character is a carry-over from Trahey’s novel, but it seems likely. After all, the dates suggest Trahey could have known a girl by the name in her childhood.

What explains the name’s use early days? I’m guessing, but maybe:

In any case, this word name counts as vintage, and exclusively feminine – at least until now.

Then along came The Hunger Games, an entire dystopian universe chock full of amazing character names. Written by Suzanne Collins, it gives us a world where young people fight to extreme victory – or certain death – for the amusement of the masses.

One of those warriors? A boy, raised for the role from childhood, named Marvel.

He’s a relatively minor figure, though he’s mentioned later in the series. And he’s not a good guy – he’s ruthless, even arrogant. He knows that winning in his only option.

Other names from similar characters, like Glimmer, Gloss, and Cashmere, remain reserved for My Little Ponies. But Marvel seems just a little bit more name-like, I think.

Certainly, The Hunger Games helps explain why the handful of children given the name in recent years are boys.

Here’s something that might tip it back to the girls: Brie Larson is set to star as Captain Marvel in March 2019.

While it’s a title, not a name – she’s Carol Danvers – it could persuade parents to revisit this one for their daughters.

And, of course, Pete Wentz recently gave the name to his daughter. The daring namer is also dad to Bronx Mowgli with ex-wife Ashlee Simpson, and Saint Lazslo, with girlfriend Meagan Camper. Wentz and Camper welcomed Marvel Jane in May 2018.

While his Saint is far from the only one, it’s worth noting that both boy names chosen by the Fall Out Boy musician have gained steadily in use in recent years – even though both remain relatively rare.

So could his daughter’s name follow? It seems possible.

What do you think of this name? Is it better for a boy or a girl? Or just way too out-there for you to consider?