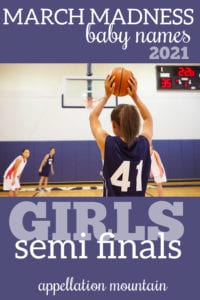 We’ve made it all the way to the semifinals!

Or, at least, four girls’ names have advanced.

If you’re new here, we spend the month of March voting our way through the most popular baby names featured at Appellation Mountain during the prior calendar year. It’s a quirky bunch – as you can see from the contestants below. But it’s also an interesting list, one that mirrors many parents’ thought processes – starting out with a wide range of possibilities, then narrowing to a list that’s still stylish – but decidedly more mainstream.

With nearly 72% of the vote, sparky retro name Maisie defeated modern mini name Noa. No surprise here. While Noa has garnered more attention in recent years, it pales to Maisie’s return to the spotlight. With names like Millie and Sadie so in favor, Maisie fits right in.

But this one was closer than I’d expect! Long and romantic Persephone has followed fellow Greek favorite Penelope up the popularity charts in recent years, so when it took nearly 70% of the vote, that made sense. But Enola still commanded a bit over 30% of the tally. That’s a respectable show for an oddity no one was thinking about until a Netflix series based on a series of YA novels introduced us to Sherlock Holmes’ daring little sister.

Here’s a bigger surprise! Showy Southern flower name Magnolia powered past rising favorite Emilia, with a confident 54% of the vote. That’s not a blowout – not by a longshot – but it’s also not a tiny margin of votes. Why does it surprise? Well, Emilia is a fast-rising Top 100 favorite while Magnolia is … okay, a fast-rising Top 250 favorite. Then again, this is Appellation Mountain, where Olivia and Harper never make March Madness at all, so maybe it’s no surprise when the slightly less mainstream choice carries the day.

This contest came slightly closer – Marigold only claimed 52% of the total. But the popularity gulf between these two names is more vast. Former Top 100 favorite Vera is now back, sitting just beyond the current Top 250. Meanwhile Marigold has yet to make the Top 1000. But that’s why we play the games, right? And it makes me wonder if Marigold really is one to watch when the new data is released …

ON TO THE SEMIFINALS

We say good-bye to Noa, Enola, Emilia, and Vera. It’s up to you which names continue to advance.

Voting remains open through Thursday, March 25th. Please check back on Saturday, March 27th to see if your favorites advance – and, of course, to vote in the next and final round!