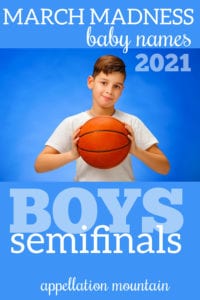 It’s the part of the tournament where things are getting really exciting!

The boys’ QuarterFinals in March Madness baby names have wrapped. And a few of the contests surprised me.

Let’s take a look at the QuarterFinals results:

With a little over 57% of the vote, well-established surname favorite bested rising possibility Hayes. Something tells me Hayes could be back in a future year of competition, but for now? It’s out, and Reid advances.

With almost 54% of the total, Welsh import Emrys wins out against surname name Palmer. Emrys is a perpetual Appellation Mountain favorite, but this might be the farthest it’s ever advanced in March Madness! Still, this one surprised me a little, if only because the more mainstream names tend to advance farthest.

Most of these contests were relatively close – much closer than in earlier rounds. But Raphael commanded over 78% of the vote against Cove. It’s possible that Cove fared well in 2020 as a curiosity, with people looking up names that defined the year. Still, it’s tough to compete against an underused classic like Raphael.

Wilder is a fast-rising pick, but it fell to traditional, quirky-cool Otto. It wasn’t a runaway victory, but with just over 55% of the total, it’s Otto that advances. We do love those -o enders, so maybe Otto will be the next Leo/Milo/Arlo?

In the prior round, we’d already said good-bye to Phoenix, Huxley, Torin, Arrow, Koa, St John, Deckard, and Endeavour. So much of it depends on the match-ups! They’re all seeded based on number of page views on the site, but – just like in that other March Madness – some of the contests feel tougher than others.

And so … on to the SemiFinals!

Wow! Can it really be the semifinals already? Voting will remain open through Wednesday, March 23rd. Please check back on Thursday, March 24th to see if your favorites won – and, of course, to vote in the final match-up!