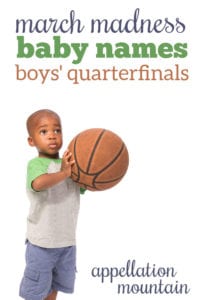 The opening round of March Madness Baby Names is in the books!

As always, some of these results surprised me. Others were exactly what I’d guessed. (Or maybe even hoped!)

In just a minute, you’ll have a chance to vote for your favorite boy names in the Quarter Finals. But first, let’s take a look at the results.

We started with the sixteen most popular boy names on the site in 2019, excluding past winners of March Madness. The most popular name (Cove) became the #1 seed, and so on.

Here’s how it all went down:

And so we bid farewell to Cove, Torin, Ridge, Wilder, Deckard, Gray, Smith, and Credence.

We’re looking for just one boy’s name to join the winners’ circle. From 2011 on, past champions Nathaniel, Arthur, Archer, Everett, Finn, Theodore, Leo, Rowan, and Arlo.

Now it’s time to vote in the quarter finals!

Two A names face off

Voting will remain open until Thursday, March 18th. Check back on Saturday, March 21st to see which names advance to the SemiFinal round!