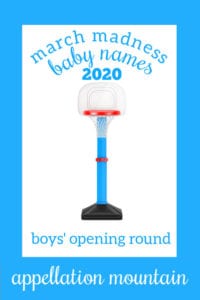 Since way back in 2011, while the rest of the world is brackets-deep in college basketball, we turn our attention to the most popular baby names on the site.

Appellation Mountain isn’t like a big name database. The most popular posts tend to be quirkier. They’re the names that aren’t covered in-depth elsewhere. That means the names competing in March Madness aren’t your usual Top Ten.

But the ones that win the month-long contest? They tend to be up-and-coming names. Or sometimes names we already love. Take a look at all the March Madness baby names champs since the very beginning:

Once a name has won, it’s knocked out of future years’ competitions. (Call it the Cora Rule, as we put it in place after the name’s 2014/2015 back-to-back victories.)

Readers vote every Saturday, as we narrow from 16 to 8 to 4 to just two … and finally to a tournament winner.

Okay, that part feels a little bit like the basketball kind of March Madness.

Ready? Let’s do this!

A face-off between two fast-rising favorites: Wilder and Caspian.

Two pop culture picks: The Fast and the Furious gives us Deckard, and the even longer-running The X-Files boosts Fox.

Smith is common as a surname, but seldom heard as a first. Koa songs like long-time favorite Noah, but has a story all its own.

A virtue name out of the Wizarding World, or a preppy surname pick?

Voting will remain open through Thursday, March 12th. Check back on Saturday, March 14th to see which names advance. And, of course, to vote in the next round!