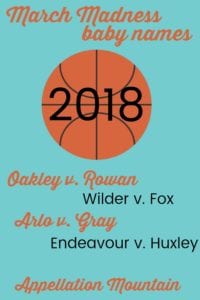 The opening round of March Madness 2018 is in the books, and we saw some close matches – and some unambiguous victories.

It’s too soon to predict the winner, but we’ve got a better guess today than we did last week.

I have my guesses for the name most likely to win it all, but there’s only one way to know for sure. Please vote!

It’s an outdoorsy match-up, with two nature names facing off.

They’re both short and stylish, but only one can win.

Another nature name contest! This time, it’s all about the trees.

This round will remain open through Thursday, March 15th. The winners of each round will advance to the SemiFinals on Saturday, March 17th – and we’ll keep on voting until we have our winners at the very end of the month!