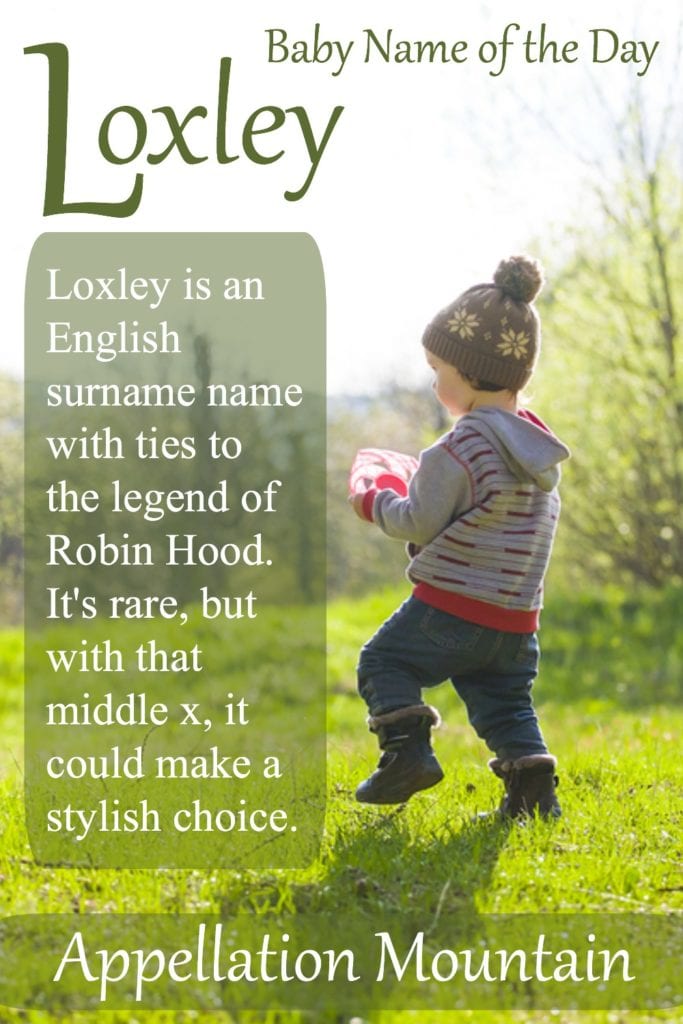 If x names like Axel and Felix and Huxley are white hot, how about this one?

Our Baby Name of the Day is Loxley.

Once upon a time, Locc was a given name. Or maybe just a part of given name in Old English, like Sherlock.

Other sources suggest that locc refers to a lock of hair. Others connect the name to lox, the Old English word for a lynx. (Confused by the idea of lynx in England? It turns out the cats are native, but have been extinct for over a thousand years.)

Of course, that familiar -ley ending refers to a clearing.

Loxley: On the Map

At least two places in England share the name: one located in Warwickshire, and a second in South Yorkshire.

The River Loxley winds through Sheffield in South Yorkshire.

Add in a few stately homes and historic buildings, and it is easy to imagine this surname and place name becoming a given name, too.

But factor in the most famous resident from greater Sheffield, and it’s surprising that we don’t hear this name more.

Legend tells us that Robin stole from the rich to give to the poor. A talented archer, he and his Merry Men roamed Sherwood Forest, running afoul of the local sheriff and doing good deeds.

By the 1400s, ballads about Robin gave his hometown as Loxley in Sheffield, South Yorkshire.

Of course, you probably know some version of the story – and there’s no shortage of variations.

Some claim that Robert of Locksley was born in the area around 1160. At the time, the forest covered a vast area, eventually meeting Sherwood Forest in Nottinghamshire.

Other accounts suggest that Robert held the title of Earl of Huntingdon – though that seems to be a later addition to the legend.

Many tellings connect the folk hero to a specific historic era. One of the most popular is the twelfth century, during the reign of Richard the Lionheart.

Today’s parents may remember the 1991 version, starring Kevin Costner. Robin Hood: Prince of Thieves introduced the character as Robin of Locksley, a nobleman. Again, it is set in the 1100s.

Despite the almost constant retelling of the legend, and frequent use of the place name and surname throughout the Robin Hood stories, Loxley is almost never bestowed as a given name.

In 2010, six girls were named Loxley – the very first year it appeared in the US Social Security records.

While that’s still pretty rare, and yet, the name is undeniably on trend:

Overall, Loxley satisfies parents looking for a name that is rare, but perfectly on trend, and has a great story to tell, too.

Do you think this works as a given name? Better for a boy or a girl?