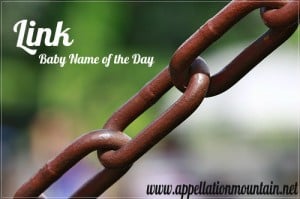 He’s an iconic video game hero, but how would this name wear on a real boy?

Thanks to Kari for suggesting Link as our Baby Name of the Day.

When Link first appeared in The Legend of Zelda, it was 1986.  The game has become a smash hit, with the original storyline deepening and evolving over time.

Still, Link has been more vocabulary word than appellation.  It’s meant “to fasten” since at least the 1300s, and the idea of a link as part of a chain has been used almost as long.  Links – as in a golf course – comes from an Old English word – hlinc – meaning rising ground.  It was a place name even before the sport existed.

Back to the video game: Link is usually depicted as a teenaged boy, with a vague resemblance to an elf.  He’s on a quest to save Princess Zelda and rescue her kingdom.  The name was chosen deliberately, to signal that Link connected past and future events.

He’s an appealing figure, and because he’s been around for nearly three decades, Link has as much backstory as many a fictional character from television or books.  He’s the opposite of a conventional hero – instead of swashbuckling bravado, Link is a humble, unassuming figure on a quest.  He’s more Frodo than Jack Sparrow.  He’s capable with a sword and accurate with a boomerang.

Another use might come to mind: Hairspray’s Link Larkin.  Do you know the story?  Tracy Turnblad is a plus-sized teenager in 1960s Baltimore, determined to dance on television, and put an end to racial segregation while she’s at it.  While Tracy is in pursuit of her chance to dance on Baltimore’s American Bandstand-style show, she meets Link Larkin.  Link’s a typical teenage heartthrob, and despite many an obstacle, the pair fall in love.  It’s a happy, upbeat story.  The film marked John Waters’ transition from cult classic to near-mainstream success, though Hairspray wasn’t a smash in 1988.

But Hairspray was reborn on Broadway in 2002, and as a musical, it was a hit.  Matthew Morrison rose to fame as Link.  A 2007 film adaptation of the musical starred Zac Efron as the Elvis–esque heartthrob.

Ready for one last reference?  In To Kill a Mockingbird, Link Deas is Tom Robinson’s employer, and, like Atticus, one of his few defenders.

As a noun name, Link boasts a modern sound, but also an appealing meaning.  He’s a link in a chain, a connection.  Could Link be a nickname for William Jr., or a little III or IV?  He certainly has the right vibe.

He can certainly be short for Lincoln, though perhaps spelled Linc.

Overall, Link makes a handsome name for a boy, with a very modern vibe.  But he’s rooted at the same time.  He’s a less expected than Cade, with nearly as rich a history as Cole.  Plus he shares sounds with the ever so popular Jack.

Link is one to watch.