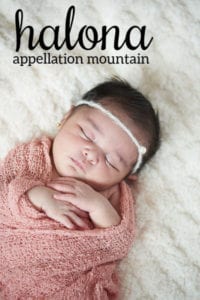 Halona sounds like lots of established girl names. But where does this one come from, exactly?

Thanks to Beth for suggesting our Baby Name of the Day.

THE TROUBLE WITH NATIVE AMERICAN NAMES

And yet, that’s problematic, for multiple reasons.

Iroquois came up in a search, but that’s really a language family, encompassing six or more distinct languages, plus plenty of dialects. Written resources tend to be limited, too. So while I can easily translate “happy” into Igbo or Dutch, it’s far more challenging to translate a word into any Native American language.

Second, names don’t work the same way across every culture. Broadly speaking, many Native American naming practices aren’t anything like Western tradition. Names can – and do – change over an individual’s lifetime.

So let’s say that Halona might very well have Native American roots. But they’re difficult to verify unless you have personal ties to someone familiar with the language – and, in that case, you might want to approach naming your child differently to reflect that heritage.

Hawaiian proved a more promising source for this name’s origin.

It’s said that Halona means a lookout, or a place from which to peer.

You can visit the Halona Blowhole on Oahu. The rock formation looks out over the Pacific, so the name makes sense. The blowhole was formed from volcanoes active on the site thousands of years earlier. Depending on weather and ocean conditions, it can shoot sea spray up to 30 feet in the air.

A small beach sits nearby. Odds are you’ve seen it on screen, either in classic films like From Here to Eternity or maybe in a Nicki Minaj video.

All of those disclaimers about Native American names? They apply to Hawaiian names, too.

Hawaiian names seem to have evolved differently. They’re now used as legal given names, both among Hawaiians and beyond.

The current Hawaiian Top 100 includes Kai – now a mainstream favorite across the US – as well as the more state-specific Kaimana and Nakoa for boys, plus Leilani, Kailani, and Mahina for girls. Some names, like Kalea, look like variations of current favorites, but probably count as Hawaiian heritage choices, too.

Halona doesn’t appear on any of those lists, and I can’t find anyone listed by the name in Hawaii today.

It’s worth noting that, for many generations, Hawaiians tended to make up novel names for their children, adding syllables and creating new possibilities. While anything is possible; this appears to be a Hawaiian place name, not a person’s name.

Speaking of places, here’s one more possible inspiration: the mythical Seven Cities of Gold, or Cíbola. It’s not necessarily original to the Spanish settlers of Mexico, as similar tales occur in other places and times.

But here’s how their version goes: in the sixteenth century, four shipwrecked survivors of a failed expedition made their way back to New Spain – Mexico – reporting that natives told them of golden cities, brimming with jewels and all manner of wealth.

The stories were eventually proved false, but rumors of such hidden wonders persisted.

It appears that real villages were identified as candidates for the golden cities, including one called Halona. But that would make the name Zuni, not Iroquois – and doesn’t make it any more of a personal name than the Hawaiian reference.

However, it’s very possible to arrive at Halona by simple invention.

Helen and Helena are quite similar. Halina comes from a Greek name meaning common, but is mostly used in Slavic cultures. Hala means halo in Arabic.

It also occurs in several fantasy settings. I found a goddess of the ice elves in one fandom; in another, a character called Halona Stormwhisperer.

And back in the real world, a singer called Halona King released a few singles in 2018.

Speaking of the real world, seven girls received the name in 1970. It’s stayed in steady, if sparing use, ever since:

All of this makes for a name with an attractive, distinctive sound. The fractured backstory is packed with mystery and intrigue – a lost city of unimaginable riches; a Hawaiian natural wonder; or maybe something completely overlooked.

It could wear well today, shortening to Hallie to fit right in with so many girls’ names, or used in full as something just a little bit different.

What do you think of Halona? Any idea about the name’s origins? 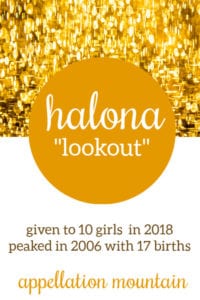