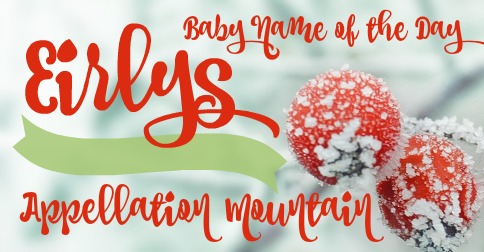 It’s a seasonal rarity by way of Wales.

Thanks to Hettie for suggesting Eirlys as our Baby Name of the Day.

Novel nature names are big in the US – think Willow, River, and Sage. But it’s not just American parents embracing the trend. Think of the Cornish Elowen and the Welsh Aderyn.

Eirlys is another import from Wales. Like many languages once threatened with extinction, efforts have been made to revitalize Welsh. It is now acknowledged as an official language in Wales and widely taught in schools.

No surprise then, that Welsh given names like Osian, Cai, Gethin, Macsen, and Ieuan are popular for boys, along with Seren, Ffion, Cadi, Elin, Cerys, Lowri, and Eleri for girls.

In Welsh, Eirlys has a pretty, appealing sound. But in English, I’m afraid it sounds an awful lot like airless. Or maybe “err less,” a command to improve one’s accuracy? Though Nook of Names adds an extra syllable – AY er lis.

It’s a little awkward for a native English speaker, but I don’t think it’s actually an unwearable choice. Bold botanical names for girls are having a moment, and it’s easy to imagine Eirlys fitting in with daring choices like Edelweiss and Tigerlily.

It’s more commonly called the galanthus – milk flower – or snowdrop. It gets the second name because it flowers in the late winter, usually before the spring equinox. This flowers are considered a sign that spring is near, and so are considered a symbol of hope.

They’re also associated with Candlemas, celebrated on February 2nd. In Christian churches, it’s considered the day that Jesus was presented at the Temple, forty days after his birth, as was customary for Jewish families at the time. But it’s also the midpoint between the winter and spring equinoxes, the middle of winter, and some believed that the weather on Candlemas Day predicted the weather for the rest of the season. Fast-forward to the United States many years later, and we now call February 2nd Groundhog Day.

Eirlys: As a Name? 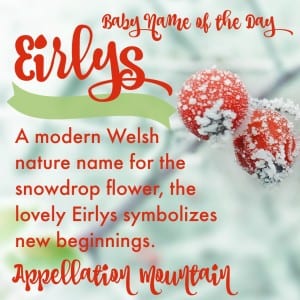 But is Eirlys ever used as a given name? I found an actress named Eirlys Hywel, who was active by 1982, and another by the name, who followed a few years later.

In the US, it’s virtually unknown. It’s never been given to even five girls in a single year. There are women by the name in US Census records, but it looks like they were all born in Wales, probably after 1900.

There’s a fairytale about a young girl sent out into a freezing, snowy night by a wicked stepmother. She can’t return without something green and growing. In some tellings, it’s fruit. But in the Russian version, it’s most often snowdrops. Because the girl is good and kind, she accomplishes the impossible feat.

All of this makes Eirlys an appealing rarity. It’s just right for a fairytale princess, but on the right side of wearable for a real girl, too. It could also be a gorgeous name for a daughter born in winter.

What do you think of Eirlys? Would you consider this name for a daughter?