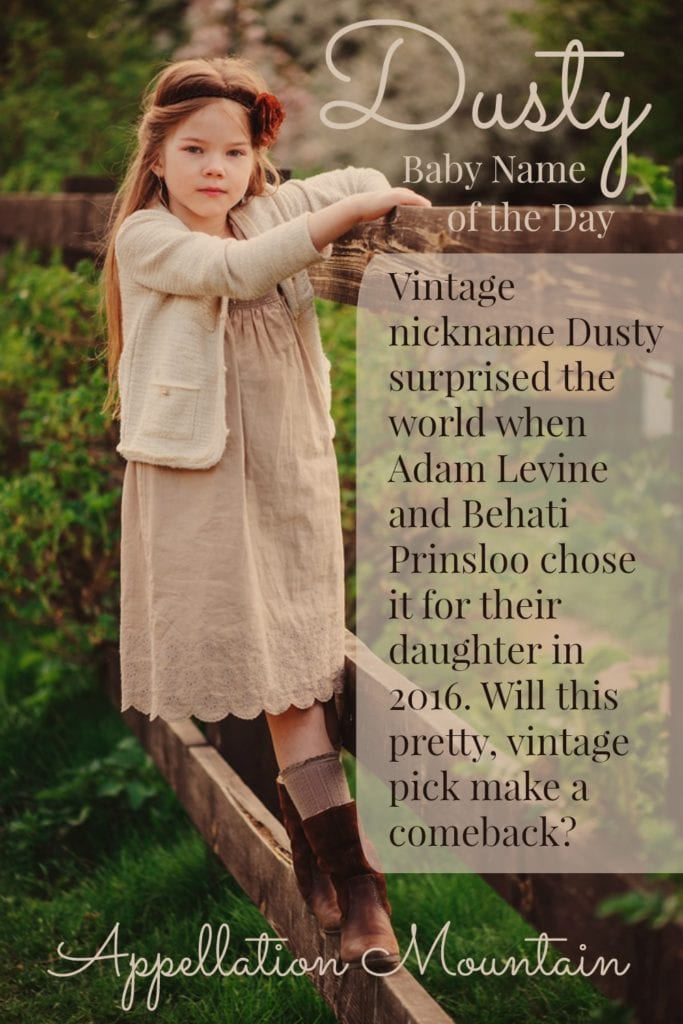 Celebrity Baby Names Week 2016 begins with this retro Baby Name of the Day.

Chances are that any Dusty you meet is actually a Mary or a Ruth, an Allen or a David.

Or possibly a Dustin.

Credit goes to Dustin Hoffman. Hoffman filmed The Graduate in 1967. His given name debuted in the US Top 1000 in 1968, and remains there today.

But the popularity of Dusty predates Dustin, so that’s not the name’s origin.

Mary Isobel Catherine Bernadette O’Brien adopted her childhood nickname and became recording artist Dusty Springfield. Her career began with 1963’s “I Only Want to Be With You.” The Rock and Roll Hall of Famer remains an icon of the Swinging Sixties. Her 1969 album, “Dusty in Memphis” appears on many Best-of lists. Today’s generation knows her as the singer of Pulp Fiction soundtrack single “Son of a Preacher Man.” Her fame endures, and she might be the most famous bearer of the name.

Dusty: By the Numbers

You might expect that the name would follow Dustin up the charts, but it isn’t so. Or you might guess that Miss Springfield would spark a rise in the name for girls. That’s not exactly the case, either.

Of course, those numbers reflect only a small percentage of those answering to the name, since so often it’s a generic nickname like Buddy.

Maybe the meaning comes from the word itself. Dust has been associated with death for centuries. We’ve been biting the dust since the eighteenth century, and we licked the dust before that. On the romantic side, we find gold dust and stardust. On the other hand, in the 1930s, extended drought turned the American Plains into the Dust Bowl, part of the Great Depression, immortalized in works like Steinbeck’s The Grapes of Wrath.

We sweep away dust. We even bust it, and yet it’s not quite the same as dirt. There’s something appealing abut dust.

Cowboys adopt the nickname Dusty. A Dallas character wore the nickname; so did George Strait’s character in 1992 movie Pure Country. (The movie flopped, but the soundtrack became a hit.) To be dusty is to be trail-tested, at home on the range.

Several plants are called Dusty Miller. They tend to be silver-white. I believe they get their name from millers, because the plants look dusted with flour.

As of 2015, the name seemed headed for obscurity. 47 boys and 15 girls were given the name. It had settled into a pattern of steady, sparing use.

The first-middle combination is actually a soft shade of pink, associated with bridesmaids dresses and all things 1980s – though I’ve heard talk that the color is back. And color names? That’s a winning trend today.

Overall, this name feels romantic and vintage, though the year it hearkens back to is more recent than many a revival. It works for a boy, especially if you love a Western vibe. But star power might push this one more decidedly towards the girls.

What do you think of Dusty? Will it catch on?