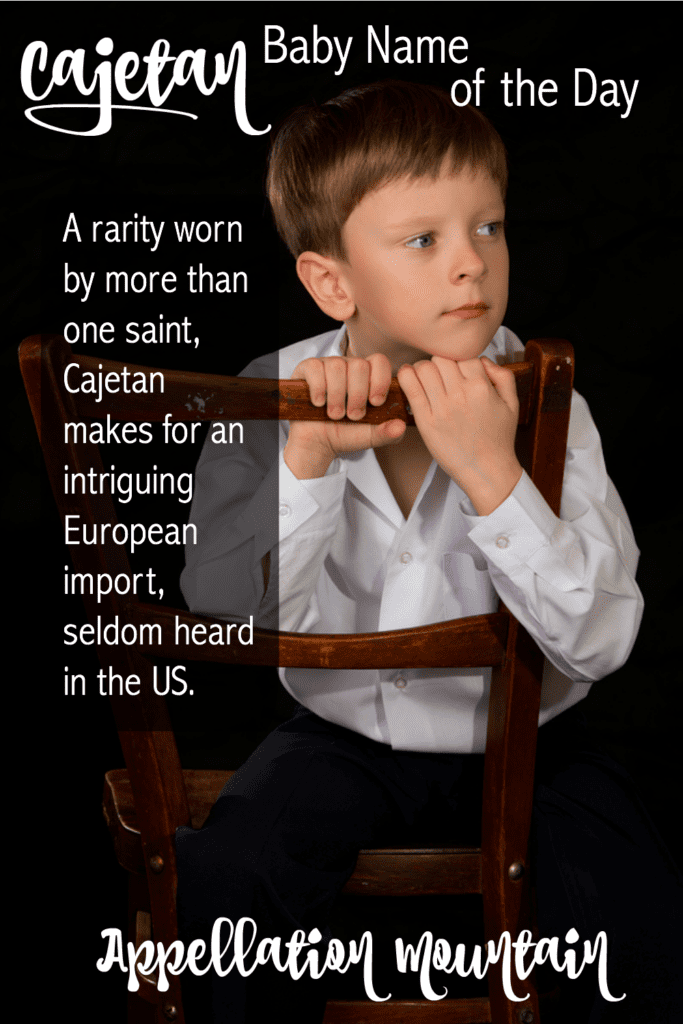 Saintly and rare, Cajetan makes for an intriguing possibility.

Kate mentions Cajetan on her Catholic name blog a few times. I’m fairly certain that’s where I first saw the suggestion of the nickname Jet.

Combining an all-but-forgotten name and modern nickname can create a great possibility.

How do you pronounce Cajetan?

In French, it sounds more like Cashton – cazh tahn. The ‘je’ slurs into a ‘z’ sound, and the ‘t’ is dropped entirely.

Or maybe the ‘j’ becomes an ‘i’ for KAI eh tahn, a pronunciation I’ve heard in British English.

And yet, in American English, I cannot imagine it being said without a ‘j’ sound. CAJ eh tan. Sure enough, listening to Americans discuss the saint, that’s the way it’s most often said.

The saint’s life makes for an interesting tale.

Born into an aristocratic family in 1480, he studied law and served as a diplomat before becoming a priest. A reformer by nature, Cajetan co-founded a religious order to blend monastic dedication with real-world service. He and his colleagues established hospitals to treat the ill, and also created the future Bank of Naples, which served the city’s workers. He endured torture during the 1527 sacking of Rome, but lived to continue his mission.

The order he helped build is known as the Theatines. Another co-founded of the order was the Bishop of Chieti. In Latin, Chieti becomes Theate – hence the name.

He was canonized in 1671, and is particularly popular in Argentina – where he’s known as San Cayetano – as well as serving as patrons saint of bankers, workers, the unemployed and those seeking work.

There’s also Saint Thomas Cajetan, who also lived and worked in the 1500s. A theologian and philosopher, he served as a spokesman for opposition to Martin Luther and the Reformation.

There’s a third Italian saint by the name, a twentieth century Italian priest canonized in 2005. He’s known as Gaetano Catanoso. (We’ll talk more about the Italian form of the name in a minute.) Catanoso served as a parish priest in poor, rural Italy, focusing on reaching those who were often neglected. He formed an order of nuns to aid in his service, and together they established schools and nursing homes.

All three saints were born in Italy, where Gaetano was the common form of the name. But this name’s roots are ancient.

Caitenaus referred to Caieta, a seaside town on the Mediterranean. Today it is known as Gaeta; it’s believed that the name may come from a Greek word meaning cave. An alternate theory is that it comes from the wet nurse of the hero Aeneas. Her name was Caieta, and the poet Vergil claimed that Gaeta was her resting place, and named for her, too.

While rare in English, forms of the name occur in many other languages. Incidentally, Cajetan is not commonly bestowed as a given name in France today. Instead, it’s Gaetan. Kajetan is the norm in Slavic Europe, while it becomes Kayetan in German and Caetano in Portuguese.

In the US, no form of the name is particularly well-known today; in fact, none of the forms ranks in the current Top 1000.

That makes this name a rarity. If you’re after something that’s clearly borrowed from a saint, Cajetan could be one to consider.

Do you think Cajetan works as a given name? How would you pronounce it?