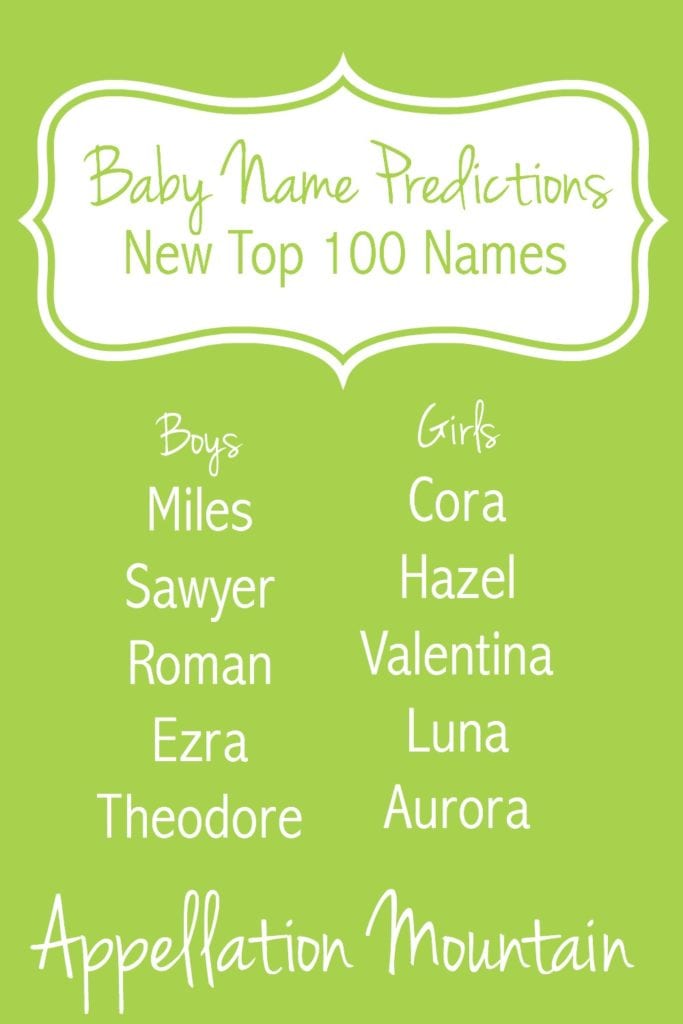 The United States Social Security Administration should release the new Top 1000 baby names later today, and I’ll have a post up shortly after we have the data.

But I can’t put my crystal ball away just yet.

Let’s take a quick look at a few of the names I think will enter the US Top 100.

Why does it matter? Entering the Top 100 is often a double-edged sword. Some parents rule out anything that popular, and immediately cross these rising popular names off their lists. But it also means that these names have reached broad exposure. So if you’re naming a baby in 2016, odds are that you’re at least aware of these names – even if Piper and Bentley weren’t familiar names back when you were in school.

Here are my guesses of the names most likely to enter the US Top 100.

Miles – Miles is jazzy and cool, and because it’s a unit of distance, there’s a sense of adventure built in, too. I heard of a marathoner who named her son Miles. Appropriate, right? Miles has gained steadily since 2000, and ranked #108 in 2014. I think it’s a sure shot for the Top 100.

Sawyer – Literary and Americana, Sawyer fits in with all of those ends-in-r names for boys we’ve been so keen on. Like Miles, Sawyer has gained steadily for over a dozen years. The name ranked #110 in 2014, suggesting that it’s a likely bet for the new Top 100.

Roman – There are aggressive names for boys, like Gunner and Slade. And then there are strong names that feel tough, but perfectly wearable. I first heard Roman on a soap opera character way back in the 1980s, but lately it’s a baby name on the rise. It brings to mind both conquering Roman armies, and all of the arts and culture of the eternal city. Roman ranked #113 in 2014, just outside of the Top 100.

Ezra – There’s something quirky and cool about literary Ezra. Ends with a names for boys have gone from unusual to common place, with favorites like former #1 Joshua and current #1 Noah redefining our ideas about how a boy’s name should sound. Ezra is every bit as Biblical, and has lately become a go-to name for parents who want something slightly different with a cool sound, but still rooted in history. At #119 in 2014, it wouldn’t take much to put Ezra in the Top 100 with similar names like Levi and Elijah.

Theodore – Alexander ranks in the current Top Ten. Sebastian isn’t far behind. And I think Benjamin might break into the Top Ten this year. What’s the next longer, traditional name for a boy ready to join them? My money is on Theodore. At #126 in 2014, it would take a decent jump for the name to break into the Top 100 – but it’s definitely within the range of possibility.

Cora – This is a gimme. Cora has been boosted by our affection for vintage names, the popularity of sound-alike Nora, and, of course, the lovely Countess of Grantham on Downton Abbey, which was still going strong in 2015 in the US. Plus, Cora ranked #103 in 2014. The merest nudge will put this name into the US Top 100.

Hazel – Along the same lines, Hazel is ranked #107. Girls’ names are slightly more volatile than boys, and a jump of +20 to +40 in the rankings is not unusual. Ecovintage Hazel was the name Emily Blunt and John Krasinski gave to their daughter in early 2014. It garnered almost universal applause – very different from the reaction when Julia Roberts used the name for her daughter in 2004. I think Hazel will continue to catch on.

Valentina – For English speakers, it’s easy to overlook the impact of the Spanish language on baby naming. I’ve seen estimates of 35 to 45 million Americans who speak Spanish – well over 10% of the population. That’s not counting families where one parent – or one set of grandparents – speak Spanish. Crossover names like Isabella, Mia, and Sophia/Sofia are a major force in baby naming. BabyCenter lists Valentina as a Top Hispanic Baby Name, and Mexican-born actress Salma Hayek named her daughter Valentina back in 2007, giving the name a major boost. As of 2014, Valentina ranked #112, just a stone’s throw from the Top 100.

Luna – Yes, it’s a Harry Potter name – probably the series’ breakout star! But Luna succeeds for the same reasons Valentina does. It works beautifully in Spanish and English. Plus, Luna has been chosen by plenty of high-profile parents, and fits in nicely with our interest in nature names and our affection for names with the ‘oo’ sound, like Lucy and Ruby. Besides, a two-syllable, ends-in-a name for a girl is always a safe bet. Luna ranked #143 in 2014, and while it would take a big jump to put this name in the Top 100, I think it could happen.

Aurora – Aurora is every bit as celestial as Luna, and shares sounds with fast-rising Cora, too. A names for girls are powerfully popular – just ask Top 20 choices Ava, Abigail, Amelia, Avery, and Aubrey. Plus, at #116, it wouldn’t take a big leap to put Aurora in the double-digits.

Those are my guesses. Are there any names you’re watching closely?