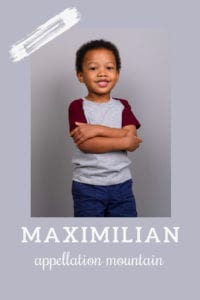 The baby name Maximilian occurs in the ancient world … and then was reinvented in Europe.

Thanks to Karla for suggesting our Baby Name of the Day.

Max names are having a moment.

Just Max is most popular, and surname Maxwell isn’t far behind.

Russell Crowe’s star turn as Maximus in 2000’s Gladiator helped usher in an era of ancient names, just in time for the twenty-first century.

Other Max names abound. Maximilian isn’t even the longest in the US Top 1000 – that distinction belongs to Maximiliano.

But Maximilian fits right in with so many names we love for our sons right now. It’s a dashing choice, a brother for Sebastian or Alexander, a substitute for Leonardo or maybe Jameson.

Strictly speaking, this name comes from Maximus, meaning the greatest.

Those ancient Romans loved their elaborations, and so Maximilianus was in use by the third century. There’s a martyr saint by the name, a missionary who died rather than renounce his faith. Around the same time, a second Maximilianus refused to serve in the Roman army on religious grounds. He, too, was executed.

So the name, like so many ancient possibilities, was waiting for rediscovery.

Instead, the Holy Roman Emperor Frederick III re-coined Maximilian for a son born in 1459.

Some say the emperor named his son for one of the early martyr saints, inspired by a dream.

Other accounts insist that the name came from the Roman generals Fabius Maximus and Cornelius Scipio Aemilianus. The creative papa smooshed them together, and the rest is history.

What we know for certain is that Frederick’s son became the Holy Roman Emperor Maximilian I, and the baby name Maximilian filtered into broader use as the German aristocracy embraced it.

Perhaps the most notable bearer of the name today is Saint Maximilian Kolbe. Even non-Catholics know his story.

After the Nazis invaded his homeland, the Polish-born priest refused to sign papers that would’ve given him German citizenship. Instead, he operated his monastery as a hospital and used it to help 2,000 Jews evade capture. The Nazis arrested him, but in Auschwitz he continued to make trouble by ministering to his fellow prisoners.

After an escape attempt, ten men were chosen to die as punishment. Kolbe wasn’t among those chosen. Instead, he volunteered.

His story is one of selflessness and unshakable faith.

The baby name Maximilian is barely heard in the US data in the late nineteenth and most of the twentieth centuries. It’s not until the 1970s that it started to rise.

That tracks with the canonization process for Kolbe. Pope John Paul II formally began the process in 1969, and canonization followed in 1982. (Becoming an officially recognized saint takes some time.)

The Catholic faithful and those inspired by Kolbe’s personal story might have piqued interest in the name, but that’s not enough to sustain a Top 1000 choice long-term.

Instead, Maximilian remains in the Top 1000 thanks to several trends:

That last one encompasses modern word names, like Legend and Maverick, as well as borrowings from days gone by. Not only has Maximilian fared reasonably well, but so has the equally grand Augustus.

It’s not always easy to know which Maxes are really Maximilians.

Jennifer Lopez’s son Max is one. Disney trivia buffs might know that Goofy’s son Max is, too.

But overall, this name remains fairly uncommon – a Top 1000 choice that isn’t quite a household name.

If you’re after an elaborate, dramatic name for a son that still feels wearable, the pairing of lengthy Maximilian with accessible Max might make this dashing classic the perfect choice.

What do you think of the baby name Maximilian? 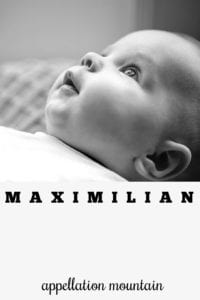