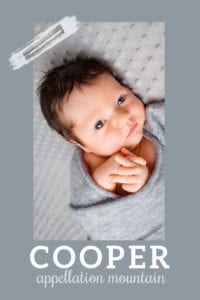 The baby name Cooper started out as a surname for a very necessary profession. Today it feels like a modern staple for a son.

Thanks to Sarah for suggesting her son’s new name as our Baby Name of the Day.

It’s hard to imagine today, but once upon a time, everything came in barrels. Vats. Buckets and tubs. The craftsman who made and repaired such vessels were called coopers.

This probably traces back to the Latin word cupa – barrel. (Or tub or cask, depending on the translation and the historical moment.) It might’ve come to English via German and Dutch.

Regardless, we know the profession was significant and widespread, and so it tracks that the surname is quite common. At different point, coopers used their skills to help provision ships, and often traveled onboard to ensure precious cargo was transported safely. They worked in brewing, too – perhaps the only place that the trade survives in the twenty-first century.

The medieval guild first established in England circa 1422 remains in existence today, though mainly as a charitable organization.

Artists and athletes, politicians and entrepreneurs are among their number. It’s not Smith or Jones, but it’s still broadly familiar.

Humility Cooper was just a year old when she sailed on the Mayflower. The author James Fenimore Cooper penned a string of classics in the early 1800s.

Oscar-winning actor Gary Cooper became a major star of Hollywood’s Golden Age and remains widely known for his man-of-action roles, particularly in Westerns like High Noon and war movies like For Whom the Bell Tolls.

Then there’s the elusive DB Cooper, whose airplane hijacking in 1971 remains unsolved all these decades later.

And if you’ve ever heard of Wilhelmina, the modeling agency? Dutch-born Wilhelmina Cooper started out as one of the best known models of the 1950s and 60s before founding an agency that still bears her name.

Journalist Anderson Cooper is well known, as is actor Bradley.

From 1992 to 97, we were Hangin’ with Mr. Cooper on the ABC sitcom about a high school gym teacher and coach.

Fiction also gives us Marissa on The OC and Sheldon from The Big Bang Theory.

Like nearly any surname name, a handful of children – especially boys – have always been named Cooper.

And yet, relatively few children received the baby name Cooper.

In the year 1900, surname names like Davis and Preston, Harrison and Fletcher all dotted the US Top 1000. The baby name Cooper appeared a few times in the US Top 1000, but was mostly missing until the year 1982.

What boosted the baby name Cooper?

It’s not clear, probably because the name’s rise was so slow and steady. Shock rocker Alice Cooper appeared on The Muppet Show in 1978, a few years after releasing his well-known album Welcome to My Nightmare. The James Fenimore Cooper classic The Deerslayer became a made-for-TV movie later that same year, but doesn’t seem to be particularly influential.

But the baby name Cooper debuted in the US Top 1000 in 1982. That’s the year that television mini-series The Blue and the Gray aired on CBS. A Civil War drama about a family divided, younger brother Matthew was played by actor Cooper Huckabee. Huckabee’s star was rising in the era, and while he’s never become a household name, it’s possible the role helped tipped Cooper into the Top 1000.

As the name rose, so did a luxury automobile.

British racing legend John Cooper and his father established the Cooper Car Company in 1947. They built racing cars, innovative ones that won tons of titles in the following decades.

In 1961, he partnered with the British Motor Company on the Mini. Originally introduced as an economy car, the Cooper version would become a staple in rally-car racing.

The name – and various iterations of the car – became iconic. In the year 2000, BMW relaunched the Mini Cooper. While they’re called just plain Mini now, the history of the name is all wrapped up with the sporty, vaguely British, and quite stylish automobile.

All combined, it creates a name that feels like a capable, sporty modern staple. A barrel-maker may seem like a humble occupation, but BMW lends it some preppy polish.

Other famous bearers of the name take it in different directions – from dashing leading man Gary Cooper to dozens of teenage and 20-something Coopers who’ve received the name over the last few decades.

Overall, the baby name Cooper fits right in with other surname favorites like Carter and Hunter, but feels maybe a tiny bit bolder. Maybe it’s nickname Coop, used for everyone from actor Gary to fictional characters to the kid next door.

And while it’s well-established as a mainstream favorite, somehow the baby name Cooper doesn’t feel too terribly common just yet – in a world of Masons and Jacksons, Cooper remains something of a stand-out.

What do you think of the baby name Cooper? 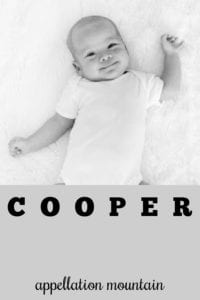