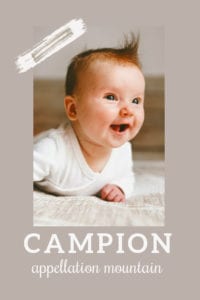 The baby name Campion combines a stylish sound with a great meaning. Bonus? It’s a nature name that feels just right for a son.

Thanks to Bonnie for suggesting our Baby Name of the Day.

In Old French, our word champion became campion. From there, it became a surname, and eventually a nature name, too.

We associate champions with sports. But long before we had the World Series or prize fights, we had trial by combat.

Think Medieval Times. Except … no paper crowns or Pepsi products.

Well, actually that’s not quite right.

Trial by combat used to be a legit way to settle disputes. You could fight them yourself, or pay a hired gun – a champion.

It comes from the Latin campionem – combatant in the field – from campus – field.

By the eighteenth century, we used the word to describe the victors in a sporting event. But it’s also taken on a more noble, almost virtuous vibe. After all, you can champion a cause.

Like many a job title, campion became a surname.

Born in England in 1540, Edmund Campion became a Catholic Jesuit priest after studying in Ireland, France, and elsewhere in Europe.

In 1580, he returned to his native England. Within a year, his preaching – and the pamphlets he authored and distributed – led to his arrest. Criticizing the Anglican church in the day was the same as threatening the Queen. And so he died a martyr, and is considered a saint.

Or maybe you’ve heard of the plant. Sometimes called catchfly or silene, it’s found throughout the northern hemisphere.

You’ll find them in gardens. At least one type is eaten, particularly in the Mediterranean. And in South Africa, another type is used in traditional rituals by the Xhosa people.

This might be one of the few nature names that seems clearly masculine.

A few real-life and fictional Campions might come to mind.

But the most famous figure must be Albert Campion, from Margery Allingham’s mystery novels. They inspired a BBC series, filmed and aired in 1989 and 1990. Peter Davison starred as the title character in Campion. And while we don’t name our babies Hercule Poirot or Sherlock Holmes, Campion might prove more wearable.

Despite all of these occasional uses – the plant, the saint, the famous fictional character – the baby name Campion has never really found its way into general use.

From 1880 through 2013, the name fails to appear in the US Social Security Administration data. That means that fewer than five boys (and fewer than five girls) received the name in every one of those years.

Only for the baby name Campion to disappear once more.

Until 2019, when there were seven newborn boys given the baby name Campion.

That’s still vanishingly rare, but that might change – maybe a little.

It turns out that’s harder than it looks. And they’re not alone.

The youngest of six children born to the androids on the new planet receives the baby name Campion. We learn that a scientist inspired his name.

A second season is on the way, so it’s possible we’ll discover more about the name. Or not. Characters answer to Holly and Vita, Tempest and Hunter. Nature and life-focused names seem like the preferred  choices in this strange new world.

Saintly and stylish, the baby name Campion feels like a perfect fits-in, stands-out choice. It sounds a little like Orion and Caspian, and it shares the nickname Cam with mainstream favorite Cameron. Plus, it could carry meaning whether it reflects your faith, your love of the natural world, or a hope that your child will be confident and competitive. And surnames-as-firsts just aren’t slowing down.

That said, Campion remains vanishingly rare. So unless Raised by Wolves kicks off a mini-boomlet in the baby name Campion, this one could remain scarcely heard for years to come.

That could represent the perfect opportunity.

What do you think of the baby name Campion? 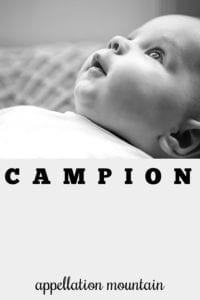