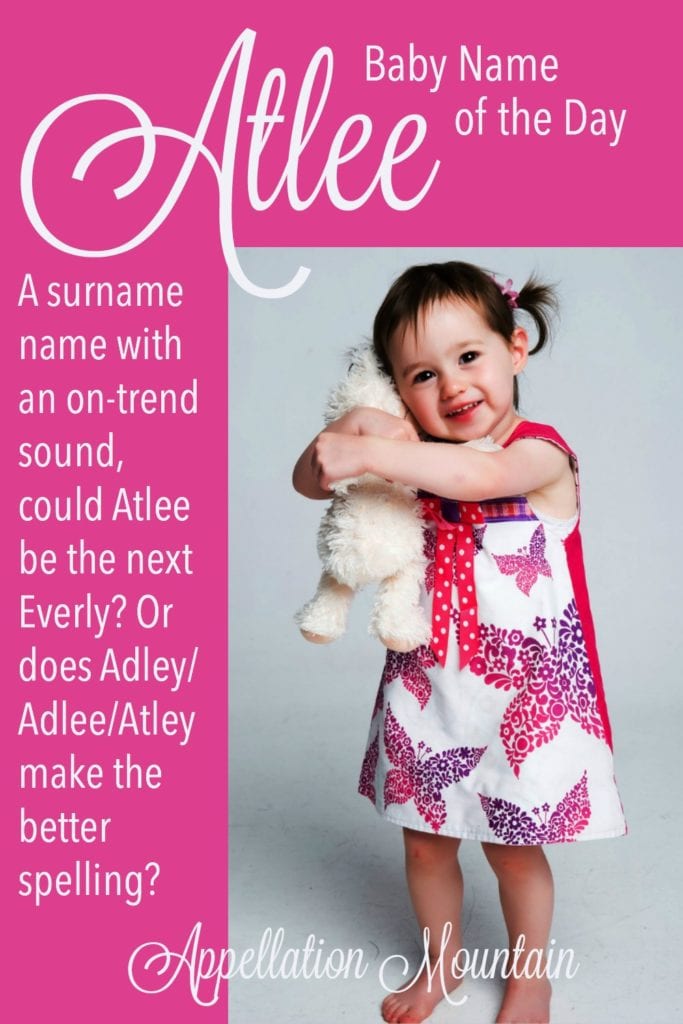 Love ’em or hate em, the political/reality television family has boosted more than one bold baby name. Could our Baby Name of the Day be next?

Depending on your perspective, this name might bring to mind another politician: Clement Attlee. Same name, but spelled with two Ts instead of one.

Clement Attlee served under Churchill during World War II, and later became Prime Minister of the United Kingdom. As the nation’s leader during the post-war period, Attlee was known for his pragmatic, consensus-oriented approach.

And yet somehow I doubt that many parents are thinking of 1940s England when they consider this name.

Atlee belongs with the many surnames occasionally used as given names. That old familiar -lee refers to a meadow or clearing or wood. In this case, the first syllable comes from the the Middle English atte – simply meaning near.

Assuming plenty of people lived near a clearing or a wood, this seems like an obvious surname option.

Others connect the name to the Old Testament Adlai, meaning God is just, or possibly refuge. He’s mentioned briefly.

It briefly appeared in the US Top 1000 during a handful of years in the 1890s. It remains generally familiar not because of the Biblical figure, but thanks to yet another political family: the Stevensons of Illinois.

The first Adlai Stevenson served as Vice President during Grover Cleveland’s administration. Adlai II was elected Governor of Illinois in 1949, and Adlai III represented Illinois in the US Senate beginning in 1970.

Still, the name feels so consistently uncommon that there’s little reason to reinvent it – and the surname clearly has roots elsewhere.

If it’s not Clement or Adlai, what explains the name’s rise?

Chalk it up to sound.

A cluster of similar names has fared well in recent years. It sounds like Hadley without the H, or like Natalie, rushed and slurred together. So many Adeline/Adaline/Adelyn names continue to climb in the rankings, too.

DC Comics gave the name to a minor character, and I found a few notables with the surname. But the data suggests that this one is rising thanks to style alone.

Atlee: By the Numbers

Like many surnames, we find Atlee in use in small numbers throughout the generations. Use held steady over the early half of the twentieth century, and was mostly – though not exclusively – male. At no point did the name tip into the US Top 1000.

It could amount to nothing, except around the late 1990s, a very few girls were given the name. The pattern continued into the early twenty-first century, and lately it seems like the trend has accelerated.

Don’t forget all of the Adalie/Adalyn names. Getting to Addie has never been easier! And, of course, now that Ashley sits firmly in mom-name territory, this feels like a possible name for a new generation.

Combining an on-trend sound with a high-profile parent can spell success for a relatively rare baby name. The Palin family has boosted many a name. While Piper and Willow have fared well for several reasons, Bristol gets credit for the rise of her unusual name. As for Bristol’s kids, her son Tripp was born in 2008 – the same year the name debuted in the US Top 1000. Daughter Sailor’s name is white hot, too, except the spelling Saylor is preferred.

What do you think of Atlee? And what spelling makes sense to you?