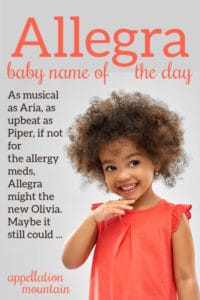 Musical Allegra has captured the world’s imagination. But can it overcome that whiff of pharmaceutical?

This name sounds happy and upbeat, and indeed it is!

The Italian word allegro means lively or cheerful, ultimately from the Latin alacrem. It’s been used as a musical term since the 1700s, which puts this name in the company of Cadence, Aria, and Melody.

While it’s never been a common choice, you’ll find the name throughout history. They often carry a creative, dramatic association:

Fiction gives us a few notable characters, too. I always think of the 2005 Will Smith movie Hitch, featuring Amber Valletta as socialite Allegra Cole. In 2006, a story line on HBO’s The Sopranos gave us Allegra Sacrimoni, daughter of another crime boss.

So why isn’t this name topping the charts? Blame the pharmaceutical industry. Since the mid-1990s, the antihistamine fexofenadine has been marketed under the name Allegra. Thanks to a seemingly bottomless advertising budget, we now associate the name with seasonal allergies.

While parents take inspiration from many unexpected places, so far the medicine cabinet isn’t one of them.

The name was rising in the 1980s, regularly given to more than 100 girls a year. But then along came the medicine, and it dropped. As of 2017, just 71 girls were given the name.

That’s not quite the pattern you might expect. Allegra makes for such an appealing choice that it’s almost overcome the anti-allergy pill tie-in. It’s risen in use in Italy, too – while it’s not Top 100, it’s been steadily heard in increasing numbers over the last decade.

But what the name has lacked is one big boost from a widely-known figure.

Could that be about to change? The latest rumor in the UK is that Meghan and Harry have short-listed Allegra if Baby Sussex is a girl. (And there’s rampant speculation that the newest member of the royal family is a girl, though nobody knows for sure. Or if the happy couple do know, they’re not telling us.)

The name has popped to the top of the lists for two reasons:

Maybe that’s just plain silly speculation. But I will say this: even if the couple has never discussed Allegra as a possible baby name, all of these headlines could prompt other parents to consider it.

Would you consider Allegra as a name for your daughter? Or does the allergy medication make this one a nope? 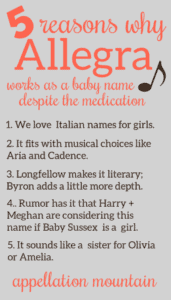