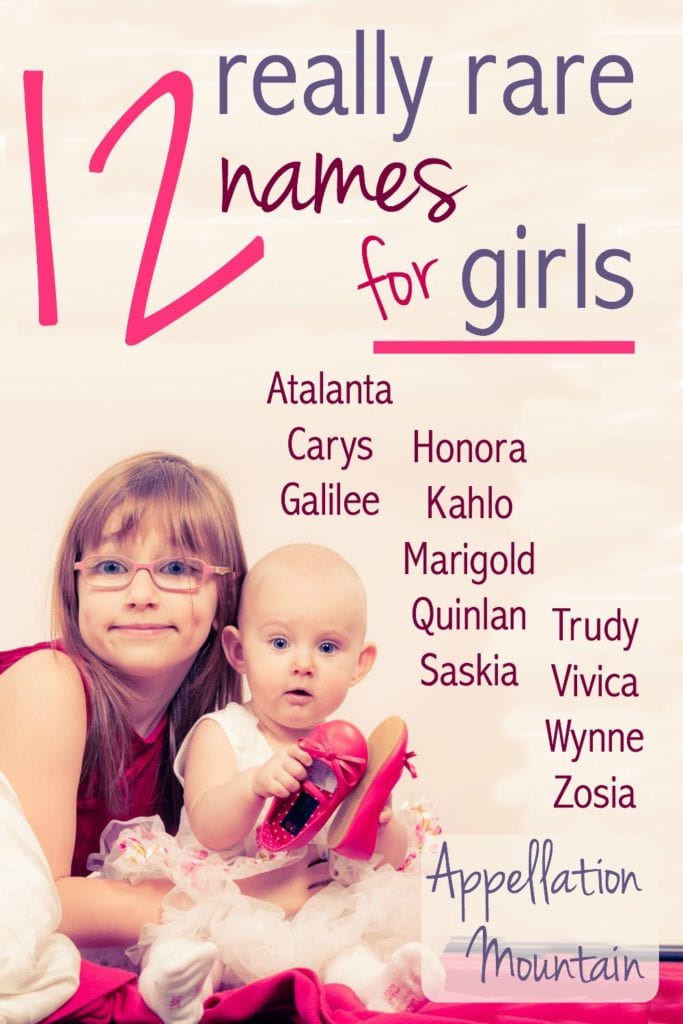 Do you like your baby names rare? This list of very rare girl names is for you!

I’m a little obsessed with the names that don’t chart in the current US Top 1000.

Yup, that means that almost three out of every ten children born last year answers to a name that is outside of the mainstream.

Because the names outside of the Top 1000 also include an awful lot of crazy, creative spellings. There are plenty of smoosh names. (Is Lilygrace really that different from the many, many girls named Lily Grace?) And some names might seem pretty ordinary, but it’s shocking to realize how infrequently they’re used today.

Rare Girl Names: A through G

Atalanta – No, not Atlanta, like the capital of Georgia. (Though rumor had it that the Beckhams shortlisted the place name for daughter Harper Seven.) In Greek myth, Atalanta became an accomplished hunter. She could outrun most men, too. When the time came for her to marry, her father agreed to only consider suitors who could best her in a contest. The stories of her courage and accomplishments are impressive. If Arabella is big, why not Atalanta? Fewer than five girls were given name in 2015, making it among the rarest of the rare girl names.

Carys – This modern Welsh name meaning love sounds like a blend of traditional girl names Caroline and Alice. Better yet, it’s a celebrity baby name, chosen by Catherine Zeta-Jones and Michael Douglas for their daughter in 2003. And yet, the name remains rare, given to just 82 girls last year.

Galilee – Galilee is an ancient place name from the Bible, the region Jesus called home. Just 25 girls were named Galilee in 2015, but it could work beautifully as a girls’ name. Less expected than Eden, with the same rhythm as Emily and Avery, Galilee makes a meaningful and surprising choice.

Honora – A mix of virtue name and quirky British pick, Honora was worn by a minor character in Once Upon a Time, and makes plenty of appearances in history and literature. But none are especially well known, and a mere 19 girls were named Honora in 2015. If you’d like an unusual formal name for Nora, this is a great option.

Kahlo – Confession: the first Kahlo I ever met was a dog. But artist surname names, like Matisse and Calder, can wear beautifully on children. Kahlo pays homage to artist Frida Kahlo, picks up on our affection for girl names ending in o, like Margot and Willow, and definitely belongs with rare girl names – it was given to fewer than five girls in 2015.

Marigold – Between Downton Abbey’s Marigold and our affection for floral names like Lily and Violet, this name might not stay under the radar for long. But in 2015, just 66 girls were given the name, putting it far behind other botanical options like Azalea and Magnolia.

Quinlan – Quinn, the go-to name for fictional television cheerleaders, currently ranks in the US Top 100 for girls. Quinlan is another Irish surname name. If you love Addison and Payton, but crave rare girl names, Quinlan could be for you. In 2015, just 25 girls received the name. Worried about borrowing from the boys? While it is slightly more common for our sons, they’re not using it in big numbers, either. A mere 50 boys were named Quinlan last year.

Saskia – In our age of Sophia and Olivia, any girl name ending in -ia can feel promising. And yet Saskia – a Dutch and German name derived from the word Saxon – was given to just 18 girls last year.

Trudy – I know, I know. Gertrude is rare for a reason. It is the age of effortless names like Mila and Aria. But nevermind Gertrude. How ’bout Trudy? We love Lucy and Sadie and Ellie. Trudy feels retro and unexpected, but not as guttural as Gertrude. (Though really, I adore Gertrude, too!) Just 23 girls were named Trudy in 2015, plus another 26 Gertrudes.

Rare Girl Names: U through Z

Vivica – There’s more than one way to spell this appealing name, but even when all the spellings are tallied, Vivica remains rare. This one can substitute for so many stylish V names, from Olivia to Vivian. Vivica A. Fox makes this spelling most visible, but it was still given to just 9 girls in 2015.

Wynne – Wynne is cousin to Welsh name Gwen. While Gwen feels familiar, Wynne remains seldom heard. It’s far less common than Lynne, much more modern than retro Wendy, and every bit as tailored as Claire or Sloane. Just 25 girls were named Wynne last year, putting it on the list of rare girl names.

Zosia – Girls’ Zosia Mamet pronounces her name like Sasha with a Z, but I’ve usually heard Zosia pronounced with a long o. But it’s really up to you, because nearly no one is named Zosia. Just 17 girls received the name in 2015. If you love Zara and Zoe, but want something truly unusual, Zosia is for you.

Would you consider any of these rare girl names? What are your favorite seldom heard names for girls?