I’ve written about a lot of unusual baby names over the past seven-plus years.

Which ones are the wackiest? The least wearable, the ones that surely must violate my 12 Signs You’re Considering a Crazy Baby Name?

When I started drafting this post earlier this month there were 1,519 names to choose from.  And many, many of them were unusual – at least according to someone.  Yikes!

The original plan was to carefully whittle this list down to ten. Instead, I came up with dozens of names.  They’re all the tiniest bit outlandish – if only because they’re so seldom heard.  Few of them are completely, unthinkably unwearable – though some might fare better as a surprising, delightful middle name than a first.

And if you can think of some super unusual baby names that have been highlighted at Appellation Mountain, but didn’t make this list?  Never fear – there’s a second installment in the works! 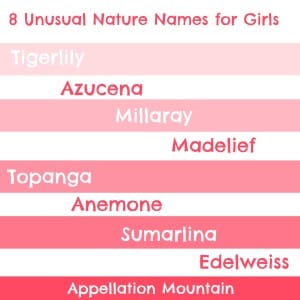 Some nature names that are very familiar as firsts – think of Lily and Rose. But choosing an unusual name from the natural world is a great option for striking that familiar-but-not-often-heard note. 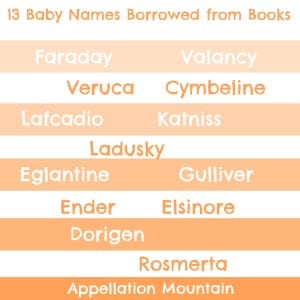 Often unusual names come to us from books – fairytale and myth, poetry and popular fiction. Authors, characters, and real people highlighted in biographies are all potential sources of inspiration. 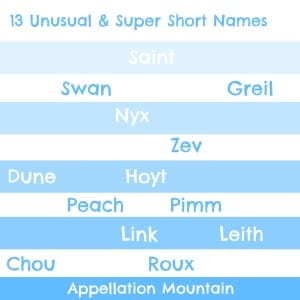 It doesn’t take four syllables and every letter in the alphabet to make a name a striking stand-out.  Plenty of short names are rich with style. 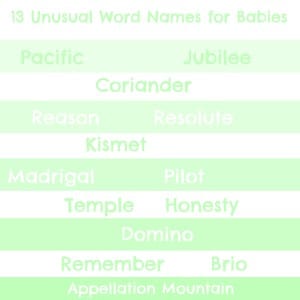 Word names work for the same reason that nature names do – we all know how to spell Temple or Kismet, and it seems like it could be a name – only we’ve never (or rarely) heard it in use. 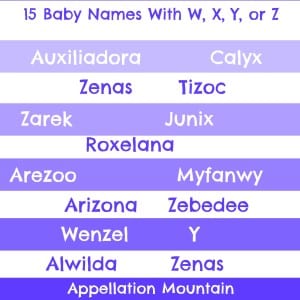 Those last four letters of the alphabet pack a punch!  Every one of these is rare, but names like Alexander and Xavier, Zoe and Wyatt prove that parents like a name with a high-value scrabble letter.  And let’s not even talk about the way that Y has become a go-to letter for respellings galore.

Are there any really unusual baby names on your shortlist?  How unusual is too unusual for you?