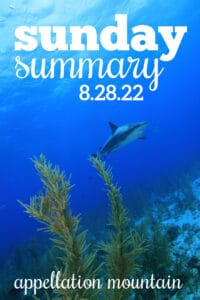 I have shark fear.

As in, I think Jaws is lurking in six inches of seawater.

When my husband and kids actually swim in the ocean? I hear John Williams’ theme music and scan the horizon for fins the whole time.

I mean … I love the beach. But I only swim in pools.

The same thing can happen with names.

We can know that our reaction is irrational. We don’t really expect anyone else to share it.

But we can’t un-see or un-hear it.

A comment on the name Flora reminded me of this. A reader with a background in the sciences noted that it makes her think of “colonies of E. coli blossoming in petri dishes.”

Fair enough. And maybe that is why Flora lags so far behind Nora, Cora, and Aurora.

It’s more logical than my worries about great whites snapping at the heels of children wading in the surf.

And yet, it makes me think of this truth:

After all, with so many names to choose from, a few random “Oh, no, there was that mean girl on the bus in third grade named …” rejections are fine.

And there are some impressions and worries that we can’t get over. Even if we know that an adorable baby Beckett would erase your memories of that awful apartment on Beckett Street.

What you can’t do?

You cannot expect others to embrace your unreasonable reasons.

That means that a scientist has to be okay when her lawyer sister names the new baby Flora.

And my kids happily swim in the waves, even as I keep one eye on my book, and one eye out for fins.

The name of Michael Bublé and Luisana Lopilato’s new daughter could catch on. After all, Cielo has the markings of a hit – a nature name with spiritual undertones; an o-ending modern choice for a daughter that shares sounds with popular favorites Sophia and Sienna; and just-high-profile-enough parents to put it our radar. The couple also shares sons Noah and Elias and daughter Vida. Their new arrival’s full name is Cielo Yoli Rose Bublé.

I often say that popular names aren’t what they used to be. Now Laura put that into chart form at Namerology, and it is so, so powerful. (So go ahead, name your kid Liam!)

Raya is on the rise. It’s about the excellent movie, of course. But a super-exclusive dating app that shares the name might sway some parents, too. It’s interesting how often an on-the-rise name picks up for children and products around the same time. (My daughter now shares her name with a brand of yogurt bars we see every time we go into Whole Foods.)

On the other hand, I don’t think the American Girl dolls have ever sparked a naming trend. But I sort of hope that Claudie might. (After all, author Brit Bennett is pretty amazing.)

Nameberry’s recent piece on trends has some good observations. I particularly like the term “spirit and soul names” to describe the broad category of modern meaningfuls that are religious(ish) … which brings us right back, I think, to Cielo. 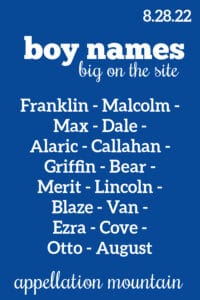 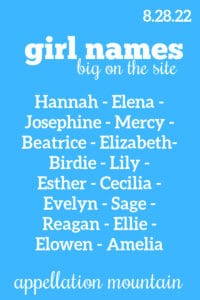