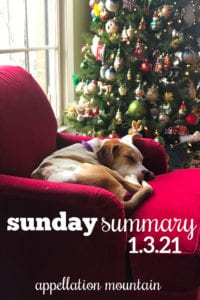 Our family grew by four paws and one very waggy tail in December.

We’d decided to adopt a rescue dog way back in 2019. It took far longer than we expected, but we finally connected with a great local organization. (If you’re in metro DC, it’s Lucky Dog Animal Rescue. They were great!)

After an almost-match or two that didn’t work out, one of their volunteers called to tell us about Darly. She had a rough start in life, but she’s relentlessly upbeat and curious. I admire her resilience and optimism.

Okay, if I’m being honest I spent the first 72 hours in a little bit of a panic. (Rookie dog mom here … I didn’t realize just how active a 40-pound puppy could be.)

But I also fell in love.

We initially assumed we’d change her name … I mean, of course. But we all pretty quickly realized that Darly – the name she came with – suited her perfectly.

Of all the dog-related surprises, my willingness to not re-name the dog was probably the one that surprised me most of all.

If you adopted a rescue pet, I’m so curious … did you change names? Why or why not?

Gotta love a Top Ten that includes Wilfred and Florence. British Baby Names has rounded up the most popular choices from the Telegraph. Better still, she’s added data on that ever-elusive question: what are the most popular middle names?

Exactly what I needed to start the New Year: more medieval names! Yup, the Dictionary of Medieval Names from European Sources has launched a new edition, adding gems like Gordian and Dominilde. Thanks to Sara and her colleagues for bringing so much joy – and scholarship! – to our lives!

I’m intrigued by Nancy’s question: are there other names ending with -fer that work? I mean … I still say Lucifer is a hard no. But I’m slightly obsessed with Dulcifer, at least as a way out-there middle. I’ll take Ava Dulcifer over Ava Rose any day …

Love the name that Emma Roberts and Garrett Hedlund (apparently) chose for their new son: Rhodes! It’s a little bit buttoned-up and scholarly, but bold and adventurous, too. Boy names ending with -s don’t appeal to me in theory, but whenever I’m presented with one (Hayes, Banks, Wells), I find myself really liking them.

This question at SanctaNomina got me thinking about the patterns we see in our kids’ names – but no one else notices. The couple asked Kate if they should stick with saints’ names drawn from the Roman canon. (It’s recited during every Mass, and includes a long list of names.) Here’s the thing – I’m Catholic. I’ve heard that exact recitation of names thousands upon thousands of times. I didn’t notice. In fact, I don’t think that their daughter’s names – Felicity and Lucy – feel particularly Catholic. (Though I know other Catholic families with daughters with both of those names.) And so I find myself thinking … we often see patterns that no one else does, and worry about breaking (or continuing) a naming rule that only our little family ever knew about in the first place. It’s another endorsement for using the name you love, nevermind the patterns.

Eager for more name chatter? Subscribe to my newsletter, sent every Tuesday: