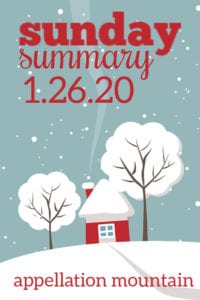 Do you know this quote:

We don’t just borrow words; on occasion, English has pursued other languages down alleyways to beat them unconscious and riffle their pockets for new vocabulary – James Nicoll

Nicoll is mostly a sci-fi book reviewer, but maybe it’s more fair to say he’s a cultural critic, if that’s a thing. The quote is often misattributed. (I was sure Ambrose Bierce said it, but turns out that was wrong – and a century or so too soon.)

Anyway, I mention it because I think it applies to names. English – maybe especially American English? – excels at borrowing and piecing together appealing sounds to create new favorites.

I’d guess very few Jennifers are Cornish or Welsh, and how many Nicoles are French? Lately I’m meeting lots of Liams who aren’t even a little bit Irish – just like Ryan and Brian before them.

It’s the way it goes – as we fall in love with a name, parents decide to use it, even if the origins don’t match their heritage.

Our kids’ names are Greek, but we’re not – and we’ve never been asked if we were. (Then again, my son’s name is so common, you’d never assume – just like Jennifer and Liam.)

Have you deliberately chosen names that match your heritage? Or did you avoid anything that felt too obviously tied to your roots? (We ended up doing this, though I’m not sure I can articulate why.) Or did you pause before choosing a name from another culture or language that isn’t your own?

A few letters + your decade of birth, and voila … Have you seen this clever little tool? Adjust for your gender and decade of birth, start typing your name, and odds are pretty good that this widget will guess your name correctly. More importantly, it might explain one of the reasons less common names can be tough to remember.

Everything about Swistle’s rant in this post makes my heart sing. A name isn’t a name until people use it as a name … and that doesn’t mean that you shouldn’t consider rarities!

Writing a modern-day Cinderella story? Ava to Zeke can help with that. They’ve compiled a list of character names for billionaire romance characters that sound pitch perfect.

This list of shockingly rare girl names is so fun because of the comps! Sure, it’s surprisingly to realize that Jill no longer ranks in the US Top 1000. But to see that Zerenity and Dorcas are more popular? Whoa. Find more jaw-dropping comparisons here.

Star Trek baby names … how can it be that we’ve never covered this topic before? It’s a short, curated list – no small feat considering the sheer number of hours we’ve followed the Starship Enterprise and its crew, plus the extended universe. 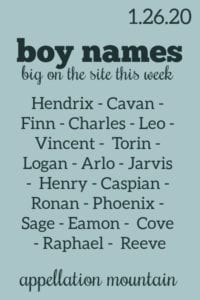 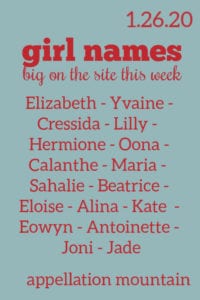 Image by Pixaline from Pixabay