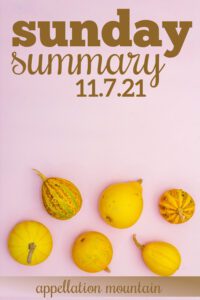 I’ve yet to see The Eternals, but I keep coming back to the character names.

That’s because most superheroes combine a secret identity with a heroic name. Those secret identity names tend to be midcentury favorites. Think Bruce and Steve and Carol and Clint. And their superhero handles just plain aren’t names. I mean, yes, there’s a baby out there somewhere named Ironman. But it’s not gonna catch on.

The Eternals offers up a different kind of name. Sersi, Phasto, Ajak, Thena. They’re immortals aliens. And they’ve been living among us forever, mostly laying low for the past six centuries, believing that the other, evil immortal aliens have been vanquished.

As such, their names aren’t human. Though they’re vaguely human-ish.

The comic book series debuted in 1976. None of the character names have ever caught on. But then again, there’s never been a big screen movie, set to launch a future series of movies.

So I’m wondering – will any of The Eternals catch on? In our age of Khaleesi, I’m curious about Sersi. And Thena isn’t so different from Thea.

My guess is that they won’t prove broadly influential … but it’s worth watching the fringes of the name data to see if any of them do see some use.

Do you see any of The Eternals characters’ names catching on?

Illusia Angelina is pretty much the exactly right name for Criss Angel’s daughter. The magician and musician welcomed his first daughter with wife Shaunyl Benson. They are also parents to Johnny Crisstopher and Xristos Yanni. (Thanks to Leah for sending me the birth announcement.)

Is Pfeiffer the new Piper? Actor Scott Speedman and girlfriend Lindsay Rae Hofmann also welcomed a daughter – their first. They named her Pfeiffer Lucia. I’m torn. A few years back, I highlighted Fifer – a slimmed-down spelling of Pfeiffer, calling it “an on-trend name no one is using.” And truly, I do see tremendous appeal. Even so, I checked the spelling of Pfeiffer half-a-dozen times just to write these few sentences. (Thanks to Nicole for sending me the birth announcement.)

Another great list of name quotes from Nancy. That story about David Bowie, and the way his stage name encompassed all sorts of ambiguities, really struck a chord. It’s a simple, straightforward name and yet, it’s full of complexities, too.

So much good in Kelle Hampton’s blog. And I adore her kids’ names – Lainey, Dash, Nella.

Speaking of siblings, Elea works to name a brother for Willow and Corran. The result? A delightful list of Scottish-inspired boy names that tend toward the rare and unexpected. Tavish, Lennon, Tiernan – oh my!

Can’t get enough name talk? Sign up for the Tuesday newsletter: 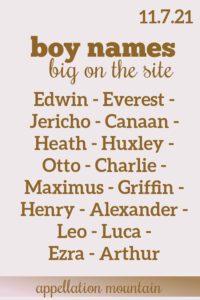 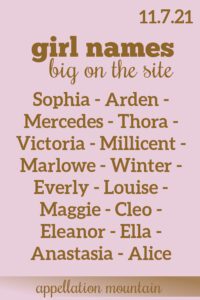