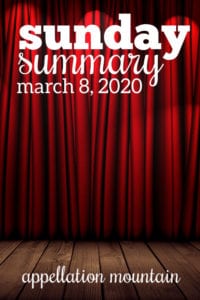 My daughter and I went to see Wicked this weekend. And while there’s lots to think about in the musical, I’m forever intrigued by one name: Elphaba.

When Gregory Maguire wrote the novel that inspired the musical, he had to name the Wicked Witch of the West. (And so many other characters, of course, but if he meant to redeem the villainous witch at the heart of The Wizard of Oz, her name mattered an awful lot.)

Maguire took Elphaba from the initials of L. Frank Baum – L.F.B. – the author of the original series.

And while we all know that the good witch is Glinda, in the musical we learn that she started out as Galinda.

There’s a story behind Glinda’s dropped A. But, beyond the L.F.B. explanation, I’ve yet to find more about Elphaba’s constructed name.

I can’t think of a single name anything like it. It pays homage to the character’s creator – eight decades after the creator’s death. How many villains are as widely-known as the Wicked Witch of the West … but remain nameless? And it’s worth noting that Elphaba’s appearance is heavily based on Margaret Hamilton’s big screen portrayal of the character. So all sorts of threads come together in just seven letters.

Have any real girls been named Elphaba? Nancy spotted one in Idaho. But there have been so few, overall, that the name doesn’t appear in the US Social Security data.

Love it or hate it, Elphaba is downright unforgettable. But whether it’s wearable for a real, non-green girl? That’s a tough call.

Good advice on name regret. My favorite part? See the advice about revisiting the wish list. Lots of wisdom there.

So many amazing Bert names. No, really. I have a soft spot for Bertram. And missing from the list? Cuthbert! Maybe not super-usable in 2020, but history galore.

I’ve always threatened to get a fish tank, but maybe I should just start naming my houseplants. Sounds like it might be good for the plants, too! There are four in my bedroom alone, so I’d better get started …

A list of 200 rock songs with a girl’s name in the title, just in case you’re looking for a name with a built-in lullaby. Or anthem.

I started with names of fictional characters, and I’ll end with one more: Morning. I’m binge-watching Episodes on Netflix. Not because there’s a character called Morning. But it has me wondering if it works? I’ve long thought Evening had potential … so why not Morning?

Oh wait – one more thing! If you haven’t voted in March Madness 2020 yet, please do! The opening round for the girls is posted here, and the boys’ contest can be found here.

That’s all for now. As always, thank you for reading + have a great week! 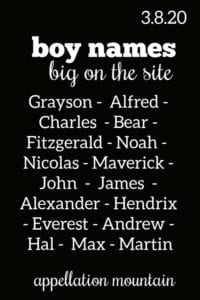 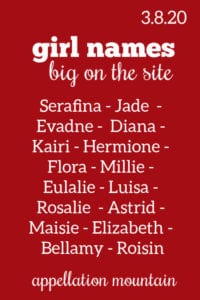