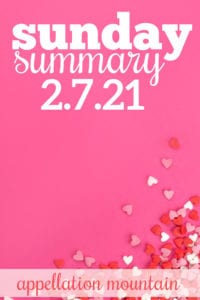 I know a handful of people who strike me as genuinely carefree. But – inevitably – as I get to know them better, there’s some area of their lives that they overthink. Not necessarily in a bad way. Maybe it’s because of past experience or professional training. Or just a general area of interest.

Something I freely admit: I overthink names. Without meaning to. If you’re reading this, maybe you do the same.

Bree recently noted that comedian Jenny Slate named her first daughter Ida Lupine. That is a seriously cool name – vintage and minimal, fierce and dramatic. Ida fits right in with Ada and Ivy, but feels far less expected than those more popular choices, too.

And then I immediately thought: ooh, is this a shout-out to legendary midcentury filmmaker Ida Lupino? Born in London, Lupino started out as an actor. But in an era when women’s careers were limited, she made the leap to directing – successfully – dozens of films and hundreds of television episodes. There’s so much more to her story, but it seems possible that Jenny Slate would be aware of Lupino’s legacy.

Or am I overthinking it?

I’ve often spotted patterns and coincidences in family’s names. (All of your kids’ names share the ‘or’ sound; your son’s name is an anagram of his mom’s name. You know.) And so often, they weren’t planned. Of course, it goes the opposite way, too. Parents sometimes ask me if this or that pattern is a problem … and I don’t notice the pattern AT ALL. (But Carter and Dylan are in alphabetical order – if we name this baby Emmett will it be weird? I’d say no. Others would disagree.)

The thing is: this kind of overthinking brings me joy. It sends me scurrying down rabbit holes, yes. But other than unfolded laundry, there are no negative consequences to spending an extra hour or three reading up on the Lupino family. (They’re fascinating.)

But when overthinking leads to not being able to settle on a single name for your child? That’s when it turns from harmless pursuit to truly vexing exercise. I’ve been thinking through how to best help families stuck in this position. And it’s tough – because we get stuck for good, understandable reasons.

I have a thought about one possible solution I’ll share in Tuesday’s newsletter. If you’re not subscribed, make sure to sign up here:

A fascinating look at stylish names circa 1916. Maybe. Nancy’s find doesn’t guarantee that every expectant parent would’ve been smitten with Myrtle and Wanda, but it’s an intriguing hint that they might’ve been the Scarlett and Reese of their day.

Cottagecore names defy any specific era. Ava to Zeke’s list includes Elowen and Jolene, Montana and Hutton. Style is a fascinating thing, because it can short-circuit the 100-year cycle, bringing back antiques decades before they might be revival ready. Or maybe just putting together sibling names that would otherwise feel mismatched.

Which reminds me … is Nancy back? British Baby Names’ latest birth announcements includes a Nancy Georgina. No question it’s climbing in the UK. But could the same happen in the US? I love the name for its Nancy Drew associations. (And I know some amazing women with the name.) Still, I think I’d be surprised (and delighted) to meet a newborn Nancy.

I find most name-a-celeb-baby lists downright silly, and this one is no exception, but … I’ll admit I’m intrigued by the idea of a More as a (middle) name. Do I think Halsey is likely to name her baby More? No. But surname Moore – which originally referred to someone who lived near a marsh, from the Middle English word moor – feels like an intriguing possibility. (PS – If you would like some really thoughtful celebrity baby name predictions, read Sophie’s column at Nameberry. She nails it!)

A fun conversation about uncommon place names and some good advice in this Swistle column. If you’re running names by someone, and that someone dismisses your suggestion as a stripper name? They should no probably longer be part of your decision process.

That’s all for this week! Thinking of you. 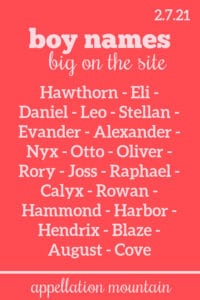 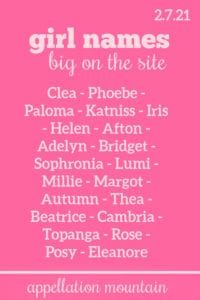