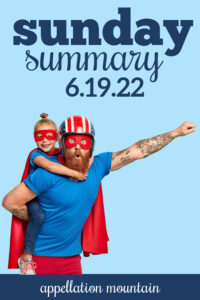 If you’re celebrating Father’s Day today, I hope you’re having a wonderful time!

And if today is hard for you, sending love.

When I started this site in 2008, I almost never heard from dads. That’s changed a lot over the last fourteen (!) years.

Maybe it’s that this generation of parents thinks about names differently. Or maybe it’s just that men, in general, feel more open expressing opinions about such matters.

And, hopefully, it signals just how many men out there are engaged, devoted parents. While I think there have always been an awful lot of good dads, I appreciate that younger men increasingly see it as a significant personal goal. I loved this interview with the NBA’s Jayson Tatum. His son Deuce, now four years old, was born the same year Tatum was drafted by the Boston Celtics.

Still, it’s not really about the rock stars and the pro athletes. It’s about the ordinary guys, right? The ones who drive carpool, change diapers, unload the dishwasher, coach soccer. It’s for my husband, who has spent long minutes running the clock at hockey games, makes excellent waffles and omelettes on demand all weekend, and does a million other things I take for granted. (He can remove almost any stain AND keep houseplants alive. Any number of last-minute Halloween costumes are all credit to him. Also, I haven’t changed a light bulb since 1999.)

Let’s hear it for the dads.

Speaking of dads, did you know that Thomas Edison nicknamed his kids Dot and Dash? Edison didn’t invent Morse code, but he started his career as a telegraph operator, which introduced him to the basics of electricity. You probably know the rest. The kids’ real names: Marion Estelle and Thomas Alva Jr. (He and first wife Mary also had a third son, William Leslie. After Mary’s death, Edison remarried. With wife Mina he had three more children: Madeleine, Charles, and Theodore. If they had cute, tech-based nicknames, they are lost to time.)

And one more dad-related name story: their twins are Reve Christine and Sky Khoudia. I like the balance here – both girls have their grandmothers’ names as middles, but I’m guessing they intentionally matched the rarer name – Reve – with the more familiar Christine, and vice versa for Sky and Khoudia. (I couldn’t find an exact meaning for Khoudia, but it seems to reflect the family’s Senegalese heritage. A stunningly gorgeous middle!) You can follow the family’s TikTok here.

Such an interesting observation: Batman is a name. Ant-Man is not. Laura looks at translation when it comes to superhero identities. Turns out there’s no rhyme or reason, but it’s still so interesting …

Double names are big in Mexico. Nancy shares the Top Ten, including two double names for girls and one for boys. American parents like them, too, but it’s impossible to know how many children receive them. Because in the US, they’d be recorded as Maria and Miguel, even if that’s not really the name they use – ever. Will that change? Is it frustrating to have a double name and always see it reduced to Maria J.? Curious to hear from those who have lived it …

While we’re speaking Spanish, let’s look at what’s big in Spain. Filipa has the Top 100 for boys and girls. Note that Filipa writes in Portuguese. Translating the article text works just fine, but will mangle the names! Some fascinating gems on the list: Aitor, Arnau, Aday for boys; Laia, Triana, Leire, Adara for girls. OH, and Arlet! Which makes me wonder if it explains, at least in part, the return of Arlette in the US?

Can’t get enough name news? Sign up for the weekly newsletter, delivered every Tuesday: 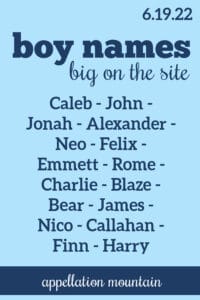 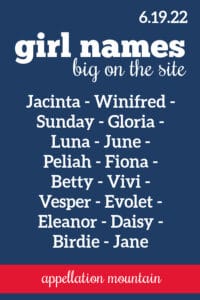