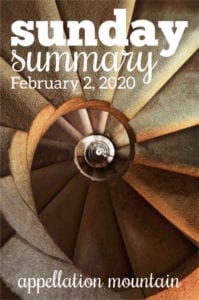 Still, I feel like we might have been The Very Last People on Earth to see Star Wars Episode IX – The Rise of Skywalker.

Let me just say this: we really ought to be seeing some girls named Rey.

Rey ranks #751 for boys in the US. And while I’m all for naming our sons after strong women, I’d guess that has more to do with Rey meaning king in Spanish.

Interestingly, Rae – the most common feminine spelling – has risen in a similar pattern to Rey. Maybe we are influenced by the space opera hero, but just opting for a more familiar spelling?

Kylo, Anakin, and, of course, Luke all appear in the current US Top 1000. So does Leia. I’d love to see Rey join them.

Would you consider the name Rey for a daughter? Maybe as a middle?

“There are different tiers, I’ve found, of fiction-inspired names.”  Loved these thoughts on sharing a name with a fictional character … and thought they were perfect for a week when I was pushing a name like Rey.

And … thoughts on changing the fiction-inspired name your parents gave you. From a girl named Jo.

Yes to Remy, and maybe to Brisby. And maybe to some of these other baby names inspired by the Year of the Rat.

Songs inspired by the hits of 1923, including Hortense. I mean … what fun! Also, this list is a great reminder that parents have been inspired by pop culture for ages and ages.

Have you watched Schitt’s Creek? The indie sitcom was much in the news for its recent batch of Emmy nominations. So I went back and watched part of the first season. At some point, daughter Alexis realizes that no one knows her middle name. Her mother retorts, “We have so many disasters bombarding us right now my dear, the middle name of an ungrateful child is hardly a priority.” It’s laugh-out loud funny, but also made my jaw drop, name-obsessed as I am. (BTW, at some point they realize her name is Alexis Claire.) 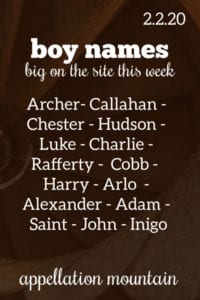 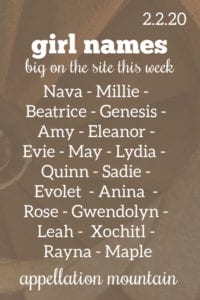