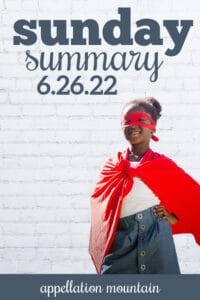 We’d planned to take a Big Family Trip in the summer of 2020. Obviously, that didn’t happen. But earlier this month, we finally made it to California!

There was whale watching. A beach day. And, of course, Anaheim.

If you haven’t been, Disney’s California Adventure is home to the Avengers Campus. My daughter met Ms. Marvel, Kamala Khan.

And I found myself with tears in my eyes.

I remember watching the first Iron Man movie in the theater way back in 2008, and I’ve seen – and enjoyed – every movie since.

In the beginning, the Avengers were mostly men, mostly white. Heroes, of course. But they were from a familiar mold. Steve and Tony and Bruce.

But it didn’t stay that way. And I’ve thrilled to see heroes slowly shift to look like the whole, wide world – and beyond. T’Challa. Wanda Maximoff. Valkyrie.

The names alone tell you that something significant has changed.

And that cultural change, in turn, means more possibility when it comes to name choices.

Parents sometimes ask if a name is strong enough. If it will mature well. Can Zion or Jett ever be a heart surgeon? Might Daisy or Nyla serve on the Supreme Court? Could Caspian or Elora become CEO?

The answer is yes, yes, and yes. In fiction at first, but increasingly, in the real world, too.

And that’s a good thing.

Saskia, Wolf, and Posy! Love the names fitness influencer Tammy Hembrow has chosen for her children. Posy is her new daughter with partner Matt Poole.

Is Tex the next Jax? I’ve always thought it has potential. Country music’s Luke Combs and wife Nicole named their son Tex Lawrence.

Hunger Games names are so, so interesting. We’re still more than a year out from the next movie set in Suzanne Collins’ universe, prequel The Ballad of Songbirds and Snakes. But looking at the names of characters, it promises to be a fascinating set: Mayfair, Tigris, Clemensia, Arachne, Bobbin.

Olav, Ulrika, and of course, Billy. The Navnekatalogen is a triumph! It re-imagines Ikea product names as possible baby names. Because who hasn’t shopped for dorm furniture while pondering whether Ingrid is the right name for a future daughter? Laura has the backstory – and a fun quiz, too!

I’m low-key obsessed with Bix. My brain connects it to jazz musician Leon Bismark “Bix” Beiderbecke. But Nancy notes that the name’s sparing use in the US almost certainly has to do with a comic strip.  I think it would make a cool nickname for Beatrix, too. 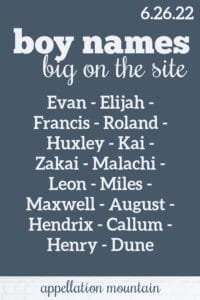 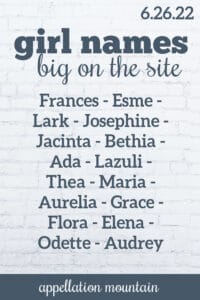