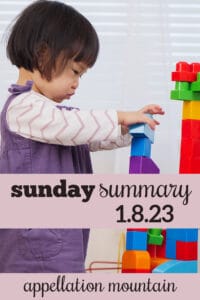 Here’s something that I’ve noticed as I’ve worked with families over the years: the temptation is to add to our lists. Making it longer, longer … and longer still.

We feel like we just haven’t found the right name yet and one more search will get us there.

I’m a huge fan of discovering new names, too, so I completely get this approach.

And yet, I think it often leaves us unsatisfied.

Because when I hear a list? Inevitably I hear some pretty good choices. Names that satisfy all the criteria the parents have outlined.

So maybe the challenge isn’t to find more names. It’s finding a fresh way to think about the names already on our lists.

Or, as Melody Wilding described it in Harvard Business Review: construct creative constraints.

Obviously, the clock is really ticking once your child is born. But that’s a highly charged moment – we’re often physically depleted. It’s an emotional roller coaster. And your work bestie, freshman year college roommate, and cousin from Topeka have all just texted you: “Hey, heard you had the baby! Congrats! What’s his name?”

Making a decision at the moment is possible. But it’s not always ideal.

Instead, I’d look at the calendar now, when you have months, or at least days to consider it. Schedule a conversation with your partner, or, if you’re a solo parent, block out some time to mull over your options.

Don’t necessarily expect to make a decision right then, but set a deadline. I like the idea of having a conversation, and then coming back 48 hours later to revisit your favorites. And if you can tie the decision deadline to a date other than your baby’s arrival? Maybe an anniversary or a holiday or that last vacation before your due date? That might work like a charm.

Not sure where to start? Here’s my favorite way to jump start a conversation about names.

Nancy offers some useful tools if you’re looking for a more analytical approach.

And if you’re really stuck? My calendar is open for calls through mid-February.

Welcome Ruston Monroe, who joins big sister Rhen Haven. They’re the children of racecar driver Daniel Hemric and wife Kenzie Hemric. I think R really is the letter of the moment. As of 2021, R ranked eighth for girls’ names, up from ninth in 2020. That means R is now more popular than J and is on track to possibly overtake K. The numbers for boys are less dramatic – the name was tenth in 2020, and remains the same in 2020. But I feel like Riggs, River, Reid/Reed, Remi/Remy, Roman/Rome/Romeo, Rory, and Rowan could change that for the boys, just like Raya, Ramona, River, Rory, Ruth, and so many Rose names are swaying the girls’ side.

While we’re talking about Rs, how do you feel about alliteration? This family wrote to Swistle to ask about naming a son Rhys or Rhodes with the last name (sounds like) Rahtickah. I love the way Swistle describes it as a “Statement option” when choosing names. You can love it or hate it, but often it depends on the exact combination. I really like Rhys with their surname. I’m less gung-ho about Rhodes, though I love the name on its own merits.

I recently discovered the writer Meg Conley, of Home Culture. That’s her newsletter, which is all kinds of fascinating and smart. And then I scrolled through her Instagram, after discovering that she has daughters called Zuzu, Brontë, and Viola. Or, to be specific, Margaret Zuzu, Viola Honey, Brontë Fig. Swoon! Excuse me while I attempt to go read everything she’s ever written. (I mean … this essay on It’s a Wonderful Life and the Southwest Airlines meltdown is the best thing I’ve read in ages.)

More #namespotting: California Congressman Jimmy Garcia has a son named Hodge, which is his wife’s surname. And television journalists Craig Melvin, of TODAY, and sports reporter Lindsay Czarniack, a daughter named Sybil and a son called Delano, Del for short. Delano is a family name on Melvin’s side.

THIS from Laura Wattenberg. Every word of this.

That’s all for this week! As always, thank you for reading + have a great week! 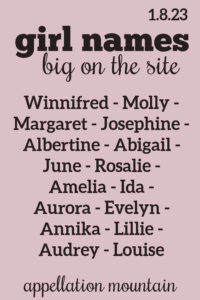 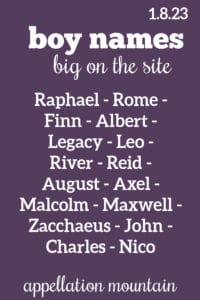