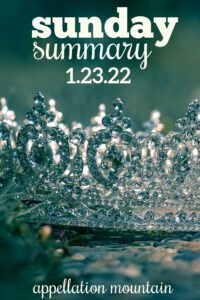 On Friday night, my daughter and I saw Six: The Musical.

It’s a pop concert, Hamilton-esque take on the six wives of Henry VIII.

You know (at least some of) the story.

The much-married king ruthlessly pursued new queens for a mix of reasons: dynastic, religious, romantic. It’s a brutal story, and one that has etched itself in our memories.

The queens, in order, were:

So their names are rattling around in my head, and I find myself thinking: wait, have names changed at all since the year 1500?

And does that mean that we’ll still be naming our children Henry and Jane in the year 2622? How about Ava and Ryan?

It’s impossible to know, of course. For every Margaret, there’s an Ursula. Botolph and Lambert were fringe names circa 1550, and they haven’t improved their standing since.

But I’d say this might be another argument in favor of classic names.

Not only is Katherine truly timeless, but it’s a name at home across centuries, impossible to pigeon-hole. (The name belongs to saintly, serious, don’t-mess-with-me Aragon and pretty, flirtatious Howard – and they wear it equally well.)

Even a classic that comes in and out of favor – Amelia, maybe, or Arthur, feels more time-tested than today’s novel favorites, like Mason or Nova.

Rock solid classics may strike some as predictable, even dull. But they’ll never be dated. And the name’s flexibility makes them at home in any age.

I love when Kate reminds us that intention trumps meaning. Sometimes we fall in love with a name because we think it means butterfly. And we write the name on the birth certificate … only to discover three months later that the definition probably wasn’t accurate, and the name really means something like linden tree clearing. Which is fine … but not butterfly. It’s totally okay! You chose the name for a good reason. That matters most of all.

Swistle’s suggestion of thinking about future siblings can feel overwhelming … but I think it can really help to narrow a list! If you’re torn between two styles, sometimes imagining what you might name that child’s future sibling might help narrow your focus.

Sophie’s list of unique names she’s crushing on was so fun! Right there with her on Sea. I’m convinced it’s usable. Oh, and I love Ludo, too.

Disliking your name can lead to good things. I can identify with so much of Nancy Friedman’s story. (She’s @fritinancy and owns the company Wordworking.)

And sometimes crazy names are actually deeply meaningful choices. This family always uses the middle name Duck. Yup, Duck. (Well – Canard in French.) Worth popping into Google translate, because the story is powerful. (And will convince you that yes, Duck is the only possible middle name to choose.) 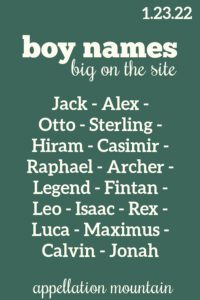 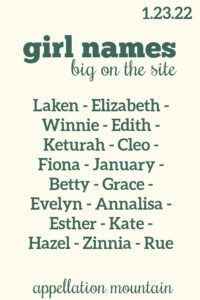