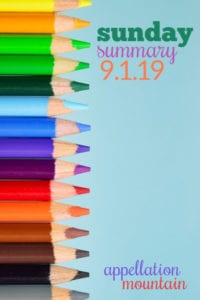 If you have school-aged kids, you’re almost certainly somewhere in the midst of back-to-school season. In my neighborhood, it’s a mix – my son had high school orientation two weeks ago and has finished his first full week of classes; my daughter started Wednesday; but many kids are still enjoying the last bits of fading summer.

The new school year appeals to me for all the obvious reasons. It feels like a fresh start in a way that January 1st doesn’t always. And, of course, the new school year means new classmates, new families … and new names!

I already gushed over a baby Homer I met at a back-to-school event, the younger sibling of a kiddo in my daughter’s school. And I’m enjoying learning the rhythms and quirks of how names work at my son’s new all-boys’ school. (A handful of kids are always called by their last names; others, only by their first. It’s a mystery to me, but then, maybe that’s the point.)

The Top 100 baby names in England & Wales are out. Elea at British Baby Names has the scoop.Plus, I combed through the list of names that make the Top 100 there, but not here, and recommend two dozen picks that American parents should steal. I remain baffled by our lack of affection for Harriet!

Do you follow Something Navy? This interview with Arielle explains her daughters’ names. They’re pretty familiar – Esme Rae and Ruby Lou – but they have great stories behind them. I think those might be my favorite kinds of names, the ones that don’t scream for attention, but contain all sorts of hidden secrets. (No, wait. I love the Pilot Inspektors and Suris of the world, too …)

Speaking of … I’m reading Pete Buttiegeg’s book, and found the craziest name story there. In The Shortest Way Home, the South Bend, Indiana mayor turned presidential contender talks about his arrival at Harvard. He took a freshman seminar with a legendary English professor named Sacvan Bercovitch. Here’s the name-y bit: Sacvan’s parents named him after Sacco and Vanzetti, two men executed for a 1920 crime they may not have committed. They were almost certainly anarchists, and their case caused a sensation. Bercovitch was born just a few years after the pair were executed, a death many considered martyrdom. Now that’s a lot of name to carry around!

Duana’s advice is spot-on here. They’re debating whether or not to name their son Freddie, but I agree. The real question is whether they should name him Frederick. (To which I say, yes. It’s the new Theodore.)

In recent weeks, we’ve seen high-profile birth announcements for boys named Winter and Scout, plus a Boone, a Krew, and two Aces. The days of giving girls daring names and boys safe ones continues to fade into the past. And that’s a good thing.

Let’s end with the names trending on the site this week: 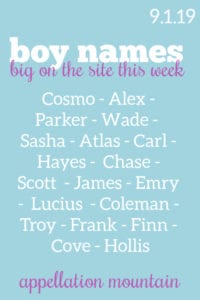 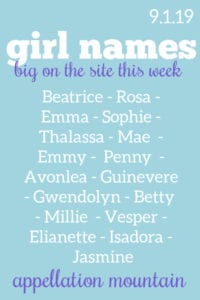 As always, thank you for reading! And have a great week!