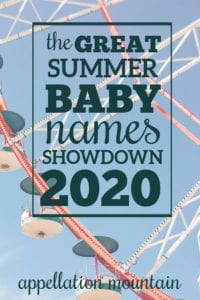 Your votes have taken us straight up to the boys’ SemiFinal round in the Summer Baby Names Showdown 2020!

If you’re new here, the Showdown is an annual tradition. Normally, we debate which names new (or recently returned) to the US Top 1000 are best.

But “normal” does not apply these days. Instead, we’re matching up the winners of another annual contest: March Madness Baby Names.

Every year, right around the time college basketball teams are vying for glory, the most-viewed names at Appellation Mountain do the same. For ten years, your votes have crowned reader favorites.

This summer, your votes have narrowed those ten names down to just four remaining contestants.

Arthur confidently defeated Finn, 56% to 44%. That’s unambiguous, and maybe not too surprising. After all, Arthur also won the Harry Potter edition of the Great Halloween Baby Names Contest.

With almost 55% of the vote, Theodore triumphed over Leo. It feels almost unfair to pit Theo against Leo, but there you have it – the longer name won.

Everett narrowly won against Nathaniel, 52% to 49%. Was it that great middle V that made all the difference? Maybe …

With 57% of the tally, Rowan swept past Caspian. Romantic and adventurous, Rowan and Caspian sound like brothers, but it’s the more popular Rowan that advances.

Now it’s time to vote in the SemiFinals!

Voting will remain open through Thursday, July 23rd. Check back on Saturday, July 25th to see which names advance. And, of course, to vote in the final!