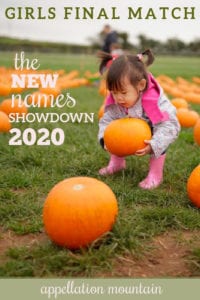 It’s always a bittersweet moment: the final round of the New Names Showdown!

Like everything circa 2020, this contest is a little bit different. We usually vote our way through our favorite new names at peak summer. But this year, the most popular baby names data release was delayed until September. So here we are, with pumpkins on our front steps and a chill in the air as we work our way through all of the possibilities.

The goal remains the same: to choose the girl’s name, recently returned to or debuting in the US Top 1000 data, most likely to rise in the coming years.

The name we choose in this contest will join past New Names Showdown winners Arden, Sylvie, Marlowe, and Zora. It’s not a perfect track record – we’ve done much better on the boys’ side – but I think, over time, that we’ll be right about each of these names.

So which names are competing for the title? Let’s look back at last week’s results in the semifinal round:

Persephone bested Navy with just over 56% of the vote. That’s not a blow-out, but it’s a pretty clear victory. The mythological, seasonal Persephone seems set to follow Penelope up the charts. Then again, Navy could be right behind Ivy and Scarlett. But, for now at least, it’s Persephone that carries the day.

By the tiniest of margins, Elodie squeaks past Theodora. Theodora garnered just about 49.5% of the total, making Elodie the winners by only a handful of ballots. But that’s enough to advance Elodie to the final round. Both names are ones that I’ve been thinking for years, “Wait, what?! That name has to be in the Top 1000.” Now they both are, but only one can advance.

Flowing and romantic and very on-trend, it’s tough to choose between these two long-time favorites that have finally earned their places in the US Top 1000.

The choice is yours!