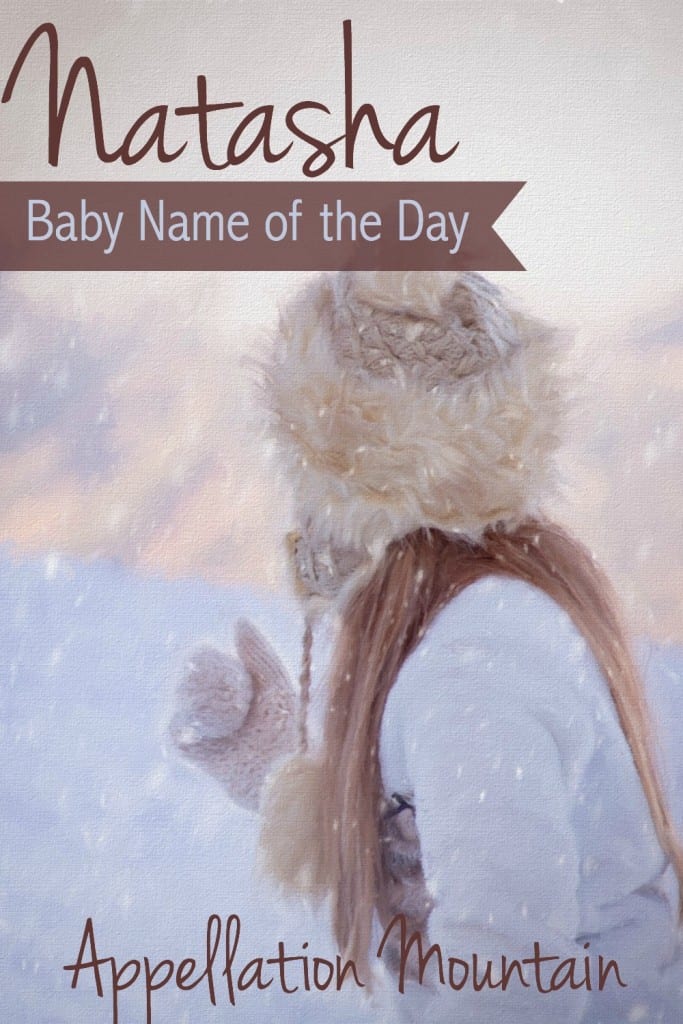 Natasha is an accessible, familiar name, both playful and glamorous.

But is this a dated choice, or a perfectly on-trend option for a daughter today?

If this name makes you think Boris, there are two reasons.

Let’s start with the literary explanation. In Tolstoy’s War and Peace, the well-born Natasha Rostova is in love with Boris at the start of the story. She ends happily – but with Pierre instead.

Then, of course, there are the evil cartoon henchmen from The Rocky and Bullwinkle show, who share the literary couple’s given names.

Of course, Natasha didn’t start out as a given name.

Instead, it’s traditionally a pet form of Natalya, long used by Russian parents. Natalia is an alternate spelling, and Natalie is heard in French and English. Natalia Zakharenko, the daughter of Russian immigrants, moved to Hollywood, changed her name to Natalie Wood, and introduced the cluster of names to American parents.

All forms of the name come from the Latin natalis, which refers to Christmas Day.

The holiday connection isn’t necessarily why Natalya was in steady use in Slavic countries. Instead, that may have to do with Saints Adrian and Natalia. They converted to Christianity in the 300s. He was martyred, while she cared for the dying. Saint Natalia is particularly popular in the Eastern Orthodox church.

The name was first given to more than five girls in 1934, and started to catch on in the 1950s. Perhaps it was part of our affection for all things Russian – 1965 blockbuster Doctor Zhivago, based on Boris Pasternak’s 1957 novel. Yves St. Laurent based his 1976 collection on Russia, and the Russian Tea Room was a famous New York City restaurant in the same era.

But credit for the name’s rise has to go to the lovely Audrey Hepburn, who played Natasha Rostova in the 1956 movie version of War and Peace.

Fictional characters – from the Rocky and Bullwinkle villain to Marvel Comic’s heroic Black Widow were given the name in the years that followed.

The name was even more popular in the UK in the same era. Maybe that’s why so many famous Natashas are British, including the late actress Richardson and pop singer Bedingfield. It was the name of Mark Darcy’s girlfriend – and Bridget’s rival – in the first Bridget Jones movie.

But the name takes on a distinctly Americana vibe thanks to first daughter Natasha Obama, the younger daughter of Barack and Michelle Obama. It’s her given name, though the teenager is typically known by nickname Sasha.

Natasha: Dated or On Trend?

All of this leads to an important question: if Natasha caught on in the 1950s and 60s, peaking in the 1980s, is it just another dated Jennifer-Ashley name?

But there’s reason to believe that it would still wear well in 2016. While the name shimmers with glamor and sophistication, it’s also a good match for elaborate names like Isabella and Francesca that have been huge in recent years, as well as rising favorites like Arabella and Magdalena.

If you’re after a stands-out, fits-in name, this might be one to consider.

What do you think of Natasha? Is it stuck in the 1980s, or still wearable today?

This post was originally published on November 1, 2008. It was substantially revised and republished on March 31, 2016.