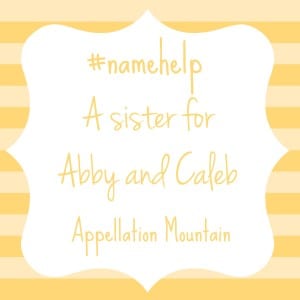 Name Help is a series at Appellation Mountain. Every Saturday, one reader’s name questions will be discussed. (Wait, you say, it’s Monday! Right you are. We’ve had so many requests that I’m adding these posts to Mondays as needed.)

Sarah is expecting a third baby, a girl, in March. She writes:

My daughter Abby’s name, Abigail Grace, was chosen years in advance as my #1 pick. We  waited to make sure it fit when she was born.

My son Caleb James was more difficult. His name wasn’t even on my shortlist until I was in the hospital because the name was already used in my extended family, as was Abigail Grace, and I wanted to avoid another duplicate. Oh well!

With this baby, none of the names on my current shortlist seem right:

The middle for any name other than Anna would probably be Faith.

I’ve wanted to stick with Biblical names, but most of the girl names I don’t particularly like or they’ve been used by too many friends and family. Right now I’m leaning most strongly toward Malin or Molly.

I’m told I’m the worst person to name a baby with because I have all these “rules” and reject so many names. I like mostly traditional/Biblical names – nothing too crazy.

I don’t have a problem with names being popular – Abigail was #8 or #9 when my Abby was born, and we don’t know any others besides my cousin’s daughter – but I’m not a fan of most of the top names from the past few years. No Madison, Isabella, Brooklyn, Chloe, Zoey, Avery, Harper-type names.

Congratulations on your new baby! Here’s the good news: everyone has rules. And the flip side of being very specific about the names that we love is that it narrows down our lists nicely.

Of course, when it narrows down our list to no names? That’s a problem!

But I don’t think you’re there.

Here’s what I hear from your lists: you like names that have a traditional feel. You don’t mind nicknames (Abby, Evie), but they’re not a must. And you’re reluctant to use a name that’s too tailored (Harper, Madison), or too elaborate (Isabella – and perhaps why Genevieve and some of the other names feel not quite right to you).

Let’s start with the names on your list that I think you should seriously consider:

Anna – I understand your hesitation. Frozen is a world-wide phenomenon, and Elsa has rocketed up the charts. Anna is also climbing in recent years, but here’s the difference between the two names. While Elsa was relatively obscure in English until the ice queen belted out “Let It Go,” Anna is a classic. It’s your grandmother’s name. It’s my great-grandmother’s name. Looking at the numbers, it’s probably on a great many family trees. It’s Biblical, literary, regal – the kind of enduring name that is tough to pin to any decade. Yes, it comes with a built-in Halloween costume if your daughter goes through a princess phase. But it’s difficult to imagine Anna feeling too tied to the Disney character. In short – I really think you ought to seriously reconsider Anna. Abby, Caleb, and Anna – I think they’re great together!

Genevieve – Genevieve isn’t Biblical, but the name has a long history of use, dating back to at least the 400s. The name isn’t as common as Abigail, but I think it’s a good sister name. They’re both tailored, traditional choices that are very popular today. And Abby and Evie sound like sisters.

Molly – Abby and Molly sound like sisters, too, and I like the idea of Abby, Caleb, and Molly as a trio. While Molly started out as a nickname for Mary, it’s long since stood as an independent given name. It’s not Biblical, but it has an old-fashioned sweetness. And yet, it’s not an insubstantial name, either. Think of the Unsinkable Molly Brown, or the Weasley family matriarch in the Harry Potter stories. Molly might be an appealing name for a child, but it’s one that has some backbone, too.

Now, let’s look at some additional names to consider:

Evelyn – I wonder if Evelyn is off your radar because it isn’t Biblical? It’s not – not even a little. Instead, it comes out of the Aveline/Evelina soup of names, with Germanic roots. And it might feel a little bit like Harper or Madison, in the sense that it’s also been used for boys in the past. But as of 2016, Evelyn feels more like a classic name for a girl. It lends itself to the nickname Evie, just like Genevieve. And Abigail and Evelyn sound very much like sisters to me.

Caroline – Caroline is another name with Germanic roots, and no Biblical ties. But, like Abigail, I think it’s a buttoned-up, traditional name for a girl. In the past, Caroline would have been Carrie. That’s still an option, as are less expected choices like Lola and Caro, but the little Carolines I’ve met in recent years don’t use any nickname at all. Abby, Caleb, and Carrie. Abby, Caleb, and Caroline. Hmmm … I think it works either way.

Rachel – Let’s focus on Biblical names for a minute. I know someone who was determined to find a traditional, not trendy, name for a daughter, but didn’t want something with oodles of nicknames, like Elizabeth or Katherine. She settled on Rachel, and it wears really well. Abby, Caleb, and Rachel sound like siblings to me.

Hannah – If Frozen has you truly vexed – and I can imagine that, given Abby’s age, you might feel like you’ve moved to Arendelle some days – would you use Hannah instead of Anna? It’s an Old Testament name, one that feels like a sibling name for Abigail and Caleb. And while Hannah has been wildly popular in recent years, I think your experience with your older children’s names is a good example of why that’s not nearly the problem that parents sometimes imagine.

Margaret – Hannah and Rachel reminded me of a family I know with three daughters. Margaret, called Maggie, is the youngest. And I’ve always thought that the names had a truly effortless style – traditional, and very wearable, too. Abby and Maggie sound like sisters, as do Abigail and Margaret. It’s not a Biblical name, but just like Caroline and Genevieve, the history of use is long and it’s certainly perceived as a classic choice. Though I wonder if it’s too harsh with your last name?

Leah – I wonder if Margaret and Evelyn and Rachel seem too tailored to your ear, and so I’ll add one more. Biblical, feminine, and traditional. Leah has been popular for decades, but I think that adds to the name’s appeal in this case. Abby, Caleb, and Leah. Leah has a lightness that might pair well with a heavier last name, too.

From your list, I still think it would be a shame to pass by Anna. It fits all of your criteria, honors your grandmother, and sounds just right with Abby and Caleb. From my list, I think Hannah is an option – one that picks up on the sound of Anna while sidestepping the Frozen associations. Or perhaps Leah, a name that feels similar to Anna and Hannah, but with a slightly different sound. The more I say it, the more I think that’s my favorite: Abigail Grace, Caleb James, and Leah Faith.

Readers, what names would you suggest as a sister for Abby and Caleb?