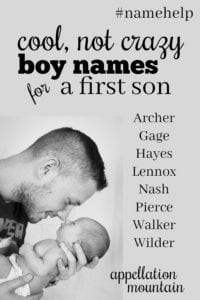 Update from Kayla: After being worried that our little guy would never have a name, we compromised on Barrett “Bear” Jameson two days after he was born. Thank you so much for your help! We’re hoping to be expecting again before too long, so we’ll be back!

I’m due with my first child this fall. It’s a boy. We talked about having a family a lot when we were engaged, and we’re both so ready to be parents!

Except that my husband’s take on baby names seems to be the crazier, the better.

He has what he calls a “boring” name – Michael James, Mike. Our last name is common, too – it sounds like Jen plus son.

Because of this, he keeps suggesting names that are the opposite of Michael. So far he’s suggested Justice, Bravery, Bear, Caliber, Remington, Racer, and Maverick. I could maybe live with some of his less obvious crazy picks, like Wade (from Deadpool), Cash (as in Johnny), or Hendrix (Jimi). The only middle name he talks about is Danger.

My list is safe, at least compared to his. I like Wyatt, Rhett, Reid, Levi, and maybe Vaughn. I wouldn’t mind using Michael or James as the middle name, or maybe another family name. (My middle name is Elizabeth, from my grandmother.)

I feel like I’m going to agree to one of his less-crazy name suggestions because I don’t want a baby with a name like a cartoon villain, but I’m not even sure that I like them – I just know that I don’t hate them as much! Help!

Congratulations on your first child!

In some ways, it’s good news that your husband is taking an active role in naming. But I can see how you’d be frustrated that you’re not finding more common ground!

And yet, here’s what stands out to me: while some names on your lists do feel miles apart, I do hear some overlap. Wyatt and Hendrix could be brothers. So could Maverick and Levi.

It’s not your style that’s so many miles apart – it’s your take on popularity. The name you like qualify as cool, modern boy names. They’re just fairly familiar. Meanwhile, the names on his list veer towards the wait-is-that-even-a-name column.

I’d frame the right name for your son this way:

I’m going to suggest some names that are cool and current, rank at #250 or higher in the US as of 2017, and hopefully fall somewhere between your husband’s favorites and yours.

Archer – It reminds me of Caliber and Remington, a name with a tie to weaponry – but a very subtle one. Archer ranks #254 in the US.

Gage – If you know your Stephen King, this was popularized by a character in Pet Sematary. But it’s gone mainstream since, a cool sound with an intriguing meaning – to measure or to pledge. Gage ranks #328.

Hayes – Hayes sounds like a preppy, presidential surname. But it also sounds like haze, which makes it far cooler. Hayes ranks #409.

Nash – In the 1990s, Don Johnson starred as Captain Nash Bridges with the San Francisco Police Department. While the show is mostly forgotten today, it sent his character’s name climbing up the charts, to #283. It feels a little less rock and roll than Cash, but still plenty cool.

Walker – Remember the Will Ferrell movie Talladega Nights, where his kids are named Walker and Texas Ranger? Turns out that Walker actually had a long history as a boys’ given name in the US. It’s the W. in George W. Bush. (And the W. in his dad’s full name, George Herbert Walker Bush, too.) Walker ranks #314.

Wilder – I think Wilder hews more closely to your husband’s style. And yet, it also suggests a certain rugged outdoorsy style, as well as a traditional surname choice. Wilder ranks #573.

My suggestion is that you focus on this middle ground and look for more names that fall somewhere in between your favorites and his.

As for the middle name conundrum? It strikes me that if you can agree to stick with the middle ground, there’s always the option of choosing two names you just plain love. Walker Hayes Jen+son sounds great; so does Gage Hendrix, Archer Reid, or Hendrix Wade.

Readers, what would you suggest to Kayla and Mike for their son? Any tips on compromise?